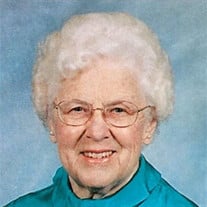 Lois was born on January 7, 1923, in Sioux Falls, South Dakota, the daughter of Elmer Berdahl and Jennie (Martinson) Berdahl, second generation Norwegian immigrants. She was baptized in Sioux Falls and confirmed in her faith at Our Savior’s Lutheran Church in Minneapolis. Lois lived the formative years of her life in Minneapolis, graduating from Central High School in 1940. She then continued her education at St. Olaf College. Pursuing her calling into the nursing profession, Lois became a Registered Nurse in 1945 after a course of study at Fairview Hospital. Lois met the love of her life, Eugene Smith, at St. Olaf College. World War II separated them, Gene serving in China while Lois completed her nursing studies. They were married on June 14, 1946, in Minneapolis. Early in their married life, they moved to a farm in the Montevideo, Minnesota area, where they raised four children and lived their life together. She continued her nursing profession at the Montevideo Hospital, Luther Haven Nursing Home, and the Montevideo public school system. So many stories attest to her skilled, dedicated, caring, passionate, and loving service. The cornerstone of Lois’ life was her faith in Jesus Christ and revolved around the life of the Church. Her varied activities included choir, playing the organ, and Christian education such as the Bethel Bible Study. Lois was active in women’s ministries and served as district president of WELCA. She also enjoyed quilting for missions, which she continued when she moved into Luther Haven. Lois was active in community affairs. She was a 67-year member of the P.E.O. sisterhood, an organization dedicated to furthering the education of women. Lois’ zest for life and ability to enjoy simple things were passed on to her family through activities such as picnicking, camping, and spending summer days at their beloved lake cabin. Lois will continue to be cherished by her four children Lawrence (Barbara) Smith, Jennifer (Lawrence) Hammond, Dewitt (Jane) Smith, and Melissa (Russell) Conn, 10 grandchildren, and 13 great-grandchildren. She was preceded in death by her husband Eugene and grandsons Paul Smith and Jesse Peterson. In lieu of flowers, memorials may be directed to P.E.O. Chapter Q, or the Women of the Evangelical Lutheran Church in America (WELCA).

Lois was born on January 7, 1923, in Sioux Falls, South Dakota, the daughter of Elmer Berdahl and Jennie (Martinson) Berdahl, second generation Norwegian immigrants. She was baptized in Sioux Falls and confirmed in her faith at Our Savior&#8217;s... View Obituary & Service Information

The family of Lois Elinor Smith created this Life Tributes page to make it easy to share your memories.

Send flowers to the Smith family.