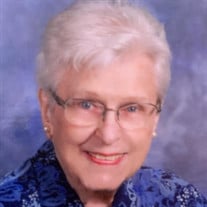 Lois Regnier, 90 of Montevideo, passed away on Monday, February 22nd at her residence at Copper Glen. A Mass of Christian Burial will be held on Thursday, February 25th at 10:30 am at St. Joseph Catholic Church. Visitation will be held one hour prior to services at the church on Thursday for friends to pay their respects. Due to covid restrictions there will be no fellowship or lunch following the service. Memorials may be directed towards Copper Glen or Rice Hospice. Lois Kathleen ( McKay) Regnier passed away February 22nd at her residence at Copper Glen, in Montevideo MN, while on hospice. Lois was born on April 7th, 1930 in Marshall, MN. She was the fifth daughter born to James John McKay and Jennie Frances (Grogan) McKay. She was baptized at Holy Redeemer Church in Marshall and attended school at St. Joseph’s Academy and graduated from Marshall High School in 1948. After high school, she worked for Hanline Studio and in 1952 she married Gordon George Regnier in Marshall. For the next ten years they lived in Redwood Falls. While living there, she colored photographs for several studios. Was very fortunate to be able to work from her home. In 1962 they moved to Marshall, Gordon had taken over as Manager of Larson’s Furniture. Lois continued coloring photographs until colored photography became reliable. After that she made custom draperies for the store and became interested in genealogy. The highlight of her genealogy research was a trip to Ireland where she traced her ancestors back to County Meath, Carlow and Kilkenny, Ireland. She was a volunteer for many years at the SWS History Center helping others in their genealogy search. She found a passion later when she discovered a company that had Nut Crackers to be painted. She painted over a hundred for herself and family. In 2004 she and Gordon moved to Montevideo. Gordon passed away in 2009. She was proceeded in death by her parents, her husband Gordon, sisters Marie, Vivian, Veronica, Pat, Theresa, and brother James. She is survived by her brother John (Darline) McKay, her daughters Cheryl (Jim) Curtiss, & Barb Regnier, her sons Mark (Pat) Regnier, & Paul (Lisa) Regnier, and her grandchildren: Randy (Kristie), Justin (Keara), Jordan (Rachael), Casey, Jamie, Jake (Parker), Jolie, Jaycie; and great grandchildren. Lois loved her family above all. She honored Gordon every day taking care of all things home related, while he worked 6 day weeks. She established a home where everyone felt secure and loved, but she allowed for freedom, never controlling. She had silent high expectations of each of her children. You never wanted to disappoint her because of this. She disciplined with her eyes and her facial expressions but never had to raise her voice. She was a tremendous judge of character, very wise, and always truthful. She was a talented artist, with a great eye for detail. She was amazing at sewing as well making many special outfits and dresses over the years. She had a special sparkle in her eyes you could call it a glimmer, she had a wonderful sense of humor and one of the best laughs. She loved her grandkids very much but didn’t get to see some of them as much as she would have liked. Lois was the definition of a good mom, and she will be missed.

Lois Regnier, 90 of Montevideo, passed away on Monday, February 22nd at her residence at Copper Glen. A Mass of Christian Burial will be held on Thursday, February 25th at 10:30 am at St. Joseph Catholic Church. Visitation will be held one... View Obituary & Service Information

The family of Lois Regnier created this Life Tributes page to make it easy to share your memories.

Lois Regnier, 90 of Montevideo, passed away on Monday, February...

Send flowers to the Regnier family.