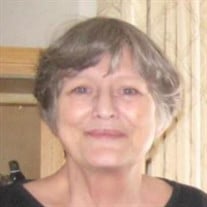 Memorial services for Linda were originally scheduled to take place at Our Savior’s Lutheran Church in Montevideo on April 4. These services will be postponed until a later date. An announcement of the new date and time is forthcoming. Linda Seeley, age 72, passed away suddenly on the morning of Tuesday, March 3, 2020, in Montevideo, Minnesota. Burial will follow at the Sunset Memorial Cemetery in Montevideo. Linda Marie Seeley was born April 1, 1947, at the Montevideo Hospital. Her parents are Mae (Johnson) Eriksen and the late Robert Eriksen. She was baptized at Mount Olivet Church by Reverend Youngdahl in Minneapolis and in 1962 confirmed by Pastor Lygre at Our Savior’s Lutheran Church in Montevideo. Growing up on a farm outside of Montevideo near Clarkfield, she adored helping her mother and father feed the chickens and milk the cows. She had a passion for outdoor adventures playing with friends and cousins, kitties and puppies, growing her endearing love for animals. In 1959, Linda’s family moved into the town of Montevideo where she relished being part of the Usher Club and Honor Roll, and graduated in1965 as a proud member of Montevideo High School’s largest graduating class. During high school, one of her first jobs was as a soda jerk at Zenk Drug and she also worked at the Mohawk restaurant. Linda then attended Concordia College in Moorhead before transferring to the University of Minnesota. At the U, Linda joined the Sigma Delta Tao sorority and graduated in 1971 with a double major in Latin and Spanish. She truly had a gift for and love of languages. On June 19, 1971, Linda married Michael James Seeley at Our Savior’s Lutheran Church in Montevideo. They initially lived in Granite Falls where they managed the country club together. Linda thrived working with the public and especially working in the Granite Falls Country Club restaurant, making house specialties like homemade blue cheese dressing. When Michael opened the Nook and Cranny restaurant in downtown Granite Falls, Linda began pursuing her teaching profession. Linda and Michael were blessed with two daughters whom they adored, Melissa and Lisa. In 1984, the family moved to Chandler, Arizona where Linda taught Latin at Marcos de Niza High School in Tempe, Arizona. During summer break, Linda and the girls spent every day swimming at Arrowhead pool followed by memorable treats at Fosters Freeze. Linda wanted Melissa and Lisa to become skilled swimmers as she was not. These summers at the pool cultivated her daughters’ love for swimming. Linda would often don a silly scuba mask as she swam and played with her daughters in the pool. When the family returned to Minnesota in 1987, they settled in Montevideo and Linda taught Spanish for various school districts including, Benson, New London-Spicer, Winsted and Chaska. During summer breaks, she worked for the migrant health program in Montevideo, Olivia and Willmar, serving as a translator between Spanish speaking migrant farm workers and health care providers. She took great pleasure in helping these workers and their families access the care they needed. Linda also worked for the U.S. Census Bureau on various projects, including the Survey of Income and Program Participation. Linda’s profession and work projects are reflective of her drive for working hard and gift to connect with families and students in Montevideo and the surrounding communities. Above all, Linda was a dedicated mother. She was her girls’ greatest fan. She delighted in supporting them behind the scenes and in the stands for swimming, basketball, softball, speech, science fair and band. She was always thinking of what more she could do for her girls like bringing Art’s cherry slushes to Lisa when she was lifeguarding at the Montevideo Outdoor Pool and compiling a carload bursting with goodies for Melissa when she headed off to college. She only rested after the girls went to sleep at night, cozying up on the couch to watch “The Tonight Show with Johnny Carson” while savoring a vanilla ice cream sundae topped with Hershey chocolate syrup and Spanish peanuts. Linda had a fun-loving personality, friendly smile and enjoyed spirited conversation with friends, family and new acquaintances. She adored being on the go. Her passion for “dragging Main” as a teenager transformed to riding around town and the state with the windows down and music blaring as an adult. Linda could often be found at her favorite Montevideo establishments, like eating egg salad sandwiches at Valentino’s or enjoying a Special K bar while reading the paper at Java River. When she was at home, she enjoyed feeding the many cats who lived in the woods behind her home, frequently visiting her front porch – times reminiscent of growing up on the farm and Linda’s love for animals. Linda loved to read, study languages, watch movies, and share her love by remaining connected with her daughters and grandchildren while near and far. Linda is survived by her daughters, Melissa (Rick Macker) Seeley of New York, NY and Lisa (Aaron Yoscovitz) Seeley of Santa Clarita, CA; mother, Mae Eriksen of Montevideo; grandchildren, Owen Macker and Callah Yoscovitz; as well as other relatives and friends. Linda is preceded in death by her father, Robert Eriksen, and husband, Michael Seeley. Blessed be her memory. Arrangements are with the Wing-Bain Funeral Home of Montevideo. For online guestbook, please visit www.wingbain.com

Memorial services for Linda were originally scheduled to take place at Our Savior&#8217;s Lutheran Church in Montevideo on April 4. These services will be postponed until a later date. An announcement of the new date and time is forthcoming. Linda... View Obituary & Service Information

The family of Linda Seeley created this Life Tributes page to make it easy to share your memories.

Memorial services for Linda were originally scheduled to take...

Send flowers to the Seeley family.