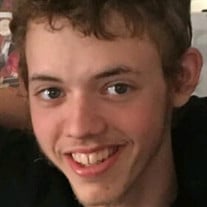 Early on the morning of April 19, 1998, the home of Dale and Mary Streblow joyfully welcomed Levi Joseph, born the youngest of ten. Every morning after, as soon as he could walk, Levi learned to tend ducks, goats, and horses on the family farm like they were his own. He grew up homeschooled alongside his siblings and sat under the Word of God at home and at church. From it he learned that, like all men, he was a sinner and separate from God, yet Jesus Christ had died for his sin and rose again three days later to bring him to God. When he was eight, the home rejoiced all the more to see Levi born a second time by his faith in Christ into the family of God. One year later, at the age of nine, he demonstrated his faith by being baptized alongside his brother Luke and was welcomed as a member of First Baptist Church of Granite Falls. Upon graduating homeschool, he studied Fluid Power Technology at Minnesota West, where he served on the Student Senate until he graduated with his associate’s degree. His whole life, Levi fiercely devoted himself to his people, and though he was private, he could grab anyone’s attention and make them his friend. Whether hunting with his Uncle Jerry or cruising with his posse on his motorcycle, he did everything with people. Sun-up to sun-down, Levi readily opened his heart, loved unconditionally, and spent himself for those he loved. With that same determination, Levi ambitiously wore many hats. He took work where he could get it, no matter what it asked of him. First, he worked with his brothers for a number of years. Then he bought his own home on 10th Avenue, while working at Subway, UPS, and Redi-Mix. On top of three jobs, Levi doggedly studied Emergency Medicine and ran medical transports as often as he could in anticipation of joining his brother Seth on the squad in Granite. Levi is dearly missed by his parents, Dale and Mary Streblow, along with his brothers and sisters, by blood and by marriage, and each of his forty-two nephews and nieces, namely: Sister Jennie and Jeremy Hartung and their children, Nadia and Mike Rayman, Alexa, Flint, Grete, Katia, Colt, Blade, and Sabrina. Sister Heidi and Micah Jenson and their children, Victoria, Isaac, Drew, Sophia, David, Olivia, Thaddeus, Ry, Jace, and Eliana. Brother Joshua and Randi Streblow and their children, Isaiah, Ariana, Julia, Kara, Lenora, Ezra, Judah, Havalah, and Fiona. His dear sister Tammie Streblow. Brother Seth and Charity Streblow and their children, Kevin, Makayla, Brennan, Natalie, Abigail, and Hannah. Sister Ellie and Eric Dubs and their children, Owen, Weston, Sonya, Noah, and Clayton. Sister Cheri and Zachariah Beman and their children, Gideon, Nehemiah, and Malachi. Brother Caleb and Jennifer Streblow and their son, Dane. His dear brother Luke Streblow. While Levi wrongfully took his life into his own hands, it never left the hands of God, who held him close, and on August 30, 2018, God drew him nearer into His presence. There, because of his faith in Christ, Levi is present with his Savior, worshiping Him perfectly alongside his grandparents Emmett and Jennie Streblow and Murvin and Leone Schuler; uncles Don Streblow, Darold “Shorty” Horning, and Charles Schuler; and cousins Kimm Larson and Bruce Sterling. Though Levi is in Heaven, his prayer for us remains Hebrews 13:20-21: “Now may the God of peace who brought again from the dead our Lord Jesus, the Great Shepherd of the sheep, by the blood of the eternal covenant, equip you with everything good that you may do his will, working in us that which is pleasing in his sight, through Jesus Christ, to whom be glory forever and ever. Amen.” Levi Streblow, 20, of Granite Falls, died Thursday, August 30th. Funeral services will be held on Wednesday, September 5th at 1:30 pm at First Baptist Church in Granite Falls. Burial will be held at Granite Falls City Cemetery. Visitation will be held on Tuesday evening from 7 to 9 pm at the First Baptist Church and will continue on Wednesday one hour prior to services.

Early on the morning of April 19, 1998, the home of Dale and Mary Streblow joyfully welcomed Levi Joseph, born the youngest of ten. Every morning after, as soon as he could walk, Levi learned to tend ducks, goats, and horses on the family farm... View Obituary & Service Information

The family of Levi Streblow created this Life Tributes page to make it easy to share your memories.

Send flowers to the Streblow family.