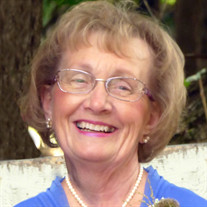 Leone Marlene Struxness was born on June 9, 1945, in Montevideo, Minnesota, the daughter of Hilmar and Luella (Septon) Nelson. She was baptized and confirmed in her faith at Mandt Lutheran Church in rural Montevideo. Leone attended country school, District #64 where her desire and love for teaching was born. She went on to attend Montevideo High School for two years and transferred to Milan High School where she graduated in 1963. Leone furthered her education by attending Concordia College in Moorhead, where she obtained her Elementary Education Degree in 1966. On October 29, 1966, Leone was united in marriage to her high school sweetheart and the love of her life, Gerald Struxness at Mandt Lutheran Church. The couple made their home in Milan where Leone taught third grade at the Appleton Elementary School. In 1967, they moved to Raymond and Leone began teaching first grade where she taught for over 10 years. After being blessed with two sons, Leone became a stay-at-home mom. When they became school age, she enjoyed being a substitute teacher for many grades. She always had the best interest and the most patience for kids and loved watching the community’s youth grow. Leone was an active member of St. John’s Lutheran Church in Raymond where she served in several capacities, including, Sunday School, Release Time Teacher, Vacation Bible School coordinator, church council, bible study, quilting, and in the women’s organizations. She served as a Cub Scout Leader and was also a past member of the Raymond Garden Club. Leone enjoyed getting together with her sisters and friends to spend many hours of sewing, knitting, crocheting and quilting. The love she put into these projects was felt by many. She had a passion for cooking and baking and made the perfect lefse, pies, apple bars and dill pickles to name a few. If she wasn’t found in her kitchen baking, you could find her in her beautiful flower garden, which she took pride in and never forgot to feed the birds! She also enjoyed camping and traveling where she got the privilege to accompany Gerry on several bus trips. Family was so very important to her. She cherished being a mom to her sons, adored going to her grandson’s activities, and was blessed to have spent time with her new granddaughter, loving each minute and memory shared with all of them. Surviving family include her husband, Gerald of Raymond; sons, David (Megan) Struxness of Clara City; Kevin (fiancé: Kathleen Sweeney) Struxness of Moorhead; grandchildren, Dalton Struxness, Garrett Struxness, Maple Struxness, and James Sweeney; siblings, Beverly Moen of Montevideo, Oma (Bob) Birgenheier of Sheridan, WY; brothers-in-law, Lee Haugen of Milan and Doug Struxness of Bloomington; as well as numerous nieces and nephews. Leone is preceded in death by her parents, Hilmar and Luella Nelson; father and mother-in law, Harold and Doris Struxness; brothers, Harland Nelson and Clifford Nelson in infancy; sister, Donna Haugen; brother-in-law, Everett Moen; and sisters-in-law, Marty Struxness and Carolyn Nelson.

Leone Marlene Struxness was born on June 9, 1945, in Montevideo, Minnesota, the daughter of Hilmar and Luella (Septon) Nelson. She was baptized and confirmed in her faith at Mandt Lutheran Church in rural Montevideo. Leone attended country... View Obituary & Service Information

The family of Leone Struxness created this Life Tributes page to make it easy to share your memories.

Send flowers to the Struxness family.