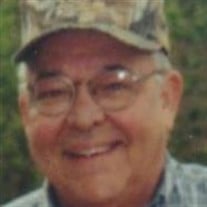 Lee Vernon Johnson was born April 9, 1940, the son of William & Agnes (Leyse) Johnson in Granite Falls. He was baptized and confirmed at the Granite Falls Lutheran Church. Lee attended school in Granite Falls and graduated from the Granite Falls High School in 1958. In January of 1959, he served his country in the United States Army and was honorably discharged in March of 1962. Lee was united in marriage to Barbara Olson on September 15, 1962. He worked with his father-in-law Howard Olson at Olson Electric, eventually becoming the owner. He enjoyed being outside either hunting, fishing or golfing. Some of the most memorable trips were to Canada fishing and pheasant hunting in South Dakota. Lee was also an avid card player. In 1967, Lee was one of the founding fathers of the Granite Falls Rescue Squad, retiring in 1999. He enjoyed time spent with family and friends and his grandchildren held a special place in his heart. Lee passed away on Wednesday, May 2, 2018, at the Granite Falls Health Care Center. He was 78 years of age. He is survived by his daughters: Stacy (Alan) Skjefte of Eden Prairie and Janelle (Stan) Kompelien of Granite Falls; grandchildren: Lucas (Lauren) Skjefte of Waconia, Tony (Margo) Skjefte of Chaska, Shelby (Seth Williams) Nielsen of Shakopee, Mollie (Garrett) Londgren of Clarkfield and Tanner Kompelien of Corpus Christi, Texas; great granddaughters: Kamdin Nielsen, Kaylee Skjefte and Avery Williams; brother Don (Ethel) Johnson of Brooklyn Center, sister-in-law Deanna (Russ) Klint of Marietta, Georgia; and nieces, nephews, extended family and friends. He was preceded in death by his parents, his wife Barbara in 2010, brother Darrold “Smiley” Johnson and his twin brother Lyle Johnson. Memorial services will be held on Monday, May 7th at 10:30 am at the United Church of Christ Church in Granite Falls. Visitation will be held Sunday afternoon from 2-4 pm at the Wing-Bain Funeral Home in Granite Falls and will continue one hour prior to services at the church on Monday.

The family of Lee Johnson created this Life Tributes page to make it easy to share your memories.