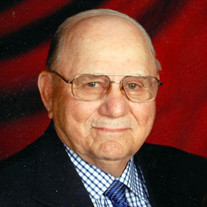 Leander Benedict Citrowske was born May 27, 1936, in St. Leo, Minnesota to Albert and Margaret (Krause) Citrowske. He was one of nine children. Leander was baptized and confirmed at St. Leo Catholic Church and also attended school there. Leander was united in marriage to RoseMary Fry on October 17, 1955. The couple made their home on a farm southwest of St. Leo. They were blessed with seven children, Randell, Linda, Rhonda, Gery, Thomas, Douglas and Marlin. Leander and RoseMary shared over 33 years together before RoseMary passed away on March 13, 1989. Leander farmed many years and later started working for Case Implement in Montevideo delivering parts to farmers in the area. He also worked at Spec Systems, Inc in Montevideo. On November 20, 1993, Leander was united in marriage to Lucille Reyerson. Together they made their home in Montevideo. He valued his faith and was an active member of the St. Joseph Catholic Church. Leander enjoyed tinkering with things in his garage, going to the lake and spending weekends in their trailer near Villard, Minnesota. He also enjoyed his garden plot that they had in the Smith Addition. Leander loved to share his garden produce with everyone. Leander faced many obstacles throughout his life, but the biggest one he faced and could not overcome was cancer. He passed away peacefully at his home on May 17, 2019, at the age of 82 years, 11 months and 20 days. Leander is survived by his wife, Lucille Citrowske of Montevideo; children, Randell (Sharon) Citrowske of Dawson, Linda Johnson of Montevideo, Rhonda (Roger) Fousek of Strandburg, SD, Gery (Phyllis) Citrowske of Montevideo, Thomas Citrowske of Boyd, Douglas Citrowske of New Ulm; Marlin (Julia) Citrowske of Dawson; 26 grandchildren; 49 great grandchildren; step children, Robert (Melanie) Reyerson of Canby, Brenda (Kyle) Anderson of Montevideo, Richard (Kayla) Reyerson of Canby; 10 step grandchildren; 3 step great grandchildren; brother, Bud (Mary) Citrowske of Denver, CO; sister, Tillie Bertamus of Madison; as well as many nieces, nephews, other relatives and friends. Leander was preceded in death by his parents, Albert and Margaret Citrowske; wife, RoseMary; siblings; daughter-in-law, Cindy Citrowske; great grandchild. Blessed be his memory.

Leander Benedict Citrowske was born May 27, 1936, in St. Leo, Minnesota to Albert and Margaret (Krause) Citrowske. He was one of nine children. Leander was baptized and confirmed at St. Leo Catholic Church and also attended school there. Leander... View Obituary & Service Information

The family of Leander Citrowske created this Life Tributes page to make it easy to share your memories.

Send flowers to the Citrowske family.