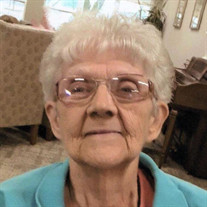 LaVonne “Bonnie” Fischer, age 79, of Montevideo and formerly of Cottonwood went to her Lord on Sunday, May 24, 2020 at Brookside Memory Care Unit in Montevideo, Minnesota. LaVonne Lois Fischer was born on September 4, 1940 at home to Lee and Amanda (Paap) Williams of Russell. She was baptized and confirmed in the Presbyterian faith. LaVonne was raised on the family farm until she was high school age when her family moved to Tyler. She attended school there and also worked as an aid in the Tyler hospital. When her family returned to the farm, she remained in Tyler to continue working and graduated from Tyler High School. After graduation, LaVonne moved to Marshall and worked at the hospital until she married Richard Fischer in 1960 and moved back to Russell. Their marriage was blessed with six children. The couple moved to Hazel Run and then to Wood Lake, where she ran the café for a few years. Through her years of employment, she had many jobs including, Ben Franklin in Granite Falls, Midwest Continent in Cottonwood, driving truck, security guard in Tampa, Florida, Project Turnabout in Granite Falls, just to name a few. LaVonne was an avid animal lover and had many pets throughout her life. LaVonne loved music and was the only one in her family to play a musical instrument. In later years, she played the guitar with a small group that played for residents of the nursing homes. LaVonne was always outgoing, and made friends easily. She had a wonderful sense of humor and loved being outdoors. Some of the happiest times were family camping adventures. LaVonne is survived by her children, Nicky Fischer of Aurora, SD, Dick (Danita) Fischer of Bushnell, SD, Dawn (Jerry) Rupp of Granite Falls, David (Dawn) Fischer of Wood Lake, Taunya Geihl of Wood Lake, Missy (Dan) Torgerson of Hanley Falls; grandchildren, Molly, Tony, Shaun, Scott, Heather, Brent, Sarah, Lee, Wade, Brandi, Zachary, Brittany, Mikael; great grandchildren; brothers, Donald (Darlene) Williams of Lynd, Robert Williams of Russell; sister, Ida (Dennis) Kesteloot of Cottonwood; as well as many nieces and nephews that loved her dearly other relatives and friends. LaVonne was preceded in death by her parents, Lee and Amanda William; Richard Fischer; brother, Joe Williams; sister-in-law, Barb.

LaVonne &#8220;Bonnie&#8221; Fischer, age 79, of Montevideo and formerly of Cottonwood went to her Lord on Sunday, May 24, 2020 at Brookside Memory Care Unit in Montevideo, Minnesota. LaVonne Lois Fischer was born on September 4, 1940 at home... View Obituary & Service Information

The family of LaVonne Fischer created this Life Tributes page to make it easy to share your memories.

Customized sympathy cards. Mailed for you.