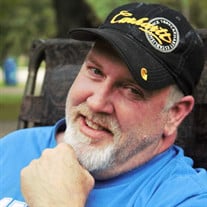 Larry Allen Cavaness, age 49, of Clara City passed away on Saturday, December 12, 2020 at Carris Rice Memorial Hospital. Private Family Graveside Service will be held Saturday, December 19, 2020 at 1:00 PM at Bethany Reformed Church Cemetery in Clara City. A Walk Thru Visitation open to the public will be held Friday evening from 5:00 – 7:00 PM at Bethany Reformed Church Larry Allen Cavaness Jr. was born on May 5, 1971 in Fullerton, California. He was the son of Larry Sr. and Kathleen (Harn) Cavaness. Larry was baptized at St. Pancratius in Lakewood, California and later confirmed in his faith at Bethany Reformed Church in Clara City. He attended school at Prince of Peace in Anaheim, California until the 8th grade and transferred to Orange Lutheran High School, graduating with the Class of 1989 in Orange, California. He furthered his education at ITT Technical Institute in Fullerton, California. On January 27, 1996, Larry was united in marriage to Jean Waltz in Santa Anna, California. The couple made their home in many areas in California, including Costa Mesa, Huntington Beach and Corona before settling in Clara City, Minnesota. Larry loved being a father and his family was his world. Larry and his father owned and operated Laser Image 2000 and Direct Office Concepts, two businesses providing technical support for office equipment while in California. After moving to Minnesota, he became a custodian at the MACCRAY school district, enjoying the relationships he made with both the students and staff. Larry had a quiet and strong personality. He kept up with politics and the current news. He enjoyed having pet fish, watching them interact in the fish tanks and really, he loved any animal. Larry’s number one priority was his family. No matter what, his family came first and he always had a smile for each. Larry valued the second amendment and enjoyed shooting guns and checking out new ones any chance he got. Larry is survived by his soul mate, Jeannie Waltz of Clara City; son, Joshua Cavaness of Willmar; daughter, Linda Waltz of Clara City; mom, Kathy Cavaness of Clara City; sister, Tammy Shelton of Valencia, CA; brother, Adam (Brady) Cavaness of Clara City; grandpa, Bill Lomas (special friend, Nancy Lennon) of Lakewood, CA; nieces and nephews, Trenten Cavaness, Kayden Cavaness, Jacob Shelton, Samuel Shelton, Leah Shelton; aunt, Linell Pea’ of South Gate, CA; uncle, Rick (Debbie) Harn of Henderson, NV; great aunt, Betty Shively; many cousins, other relatives and friends.. Larry is preceded in death by his father, Larry Cavaness Sr; grandma, Veronica Lomas; paternal grandparents, Elmer and Aline Cavaness.

The family of Larry Cavaness created this Life Tributes page to make it easy to share your memories.

Send flowers to the Cavaness family.