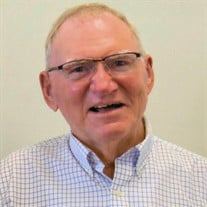 Kenny Tostenson, 83, of Montevideo, died Saturday, November 9, 2019 at Brookside Senior Living. Funeral services will be held on Tuesday, November 12th at 1:30 pm at Our Savior's Lutheran Church. Visitation will be held from 5 to 7 pm Monday at Our Savior's Lutheran Church and will continue one hour prior to services on Tuesday. Memorial preferred to Hospice, Gorecki House in St. Cloud or the charity of your choice. Kenneth Dean Tostenson was born May 20, 1936, the son of Edwin and Eleanora (Gulden) Tostenson in Montevideo. He was baptized and confirmed at Jevnaker Lutheran Church. He attended District 64 country school, Milan School, and graduated from the Montevideo High School in 1954. Kenny was united in marriage to Sally Stokke on November 28, 1954, in rural Montevideo. To this union five children were born. Sally passed away in 1988. Kenny was united in marriage to Darlene Tufto on January 6, 1989, at Our Savior's Lutheran Church. He was an entrepreneur at a young age. During his younger years he hauled gas, delivered seed corn and worked for the railroad. He later started Tostenson Road Construction, and then started Tostenson Inc. in the garbage and recycling business. He was community minded and served on the Montevideo School Board for two terms, Montevideo Jaycees, Montevideo Golf Club, and taught Sunday School. Kenny lived life to the fullest. He enjoyed the outdoors and loved to go hunting, fishing, golfing, and snowmobiling. He especially enjoyed his time at Lake Miltona and Hawk Creek hunting camp with family and friends and entertaining them at the lake. Celebrating birthdays was a very special time for him. He is survived by his wife Darlene; children: Becky Dahl, Stacy (George) Geerdes, Lonny Tostenson, Perry (Lori) Tostenson, all of Montevideo and Randy (Mary) Tostenson of Olathe, Kansas; three step children Ken Tufto of Dawson, Stacy Tufto of Montevideo and Alan Tufto of Dawson; 10 grandchildren; 12 great grandchildren; 4 step grandchildren; brother Arlo (Janet) Tostenson of Montevideo, brother-in-law Wayne Gustafson of Montevideo, sister-in-law Sybil (David) Zimmerman of Austin, TX, brother-in-law Mike (Rose) Stokke of Owatonna, MN, and numerous nieces, nephews and extended family and friends. He was preceded in death by his parents, wife Sally, son-in-law Richard Dahl, daughter-in-law Nancy Tostenson; two sisters: Burt Larson and Dorothy Gustafson, and brothers-in-law Wally Larson and Ken Anderson.

Kenny Tostenson, 83, of Montevideo, died Saturday, November 9, 2019 at Brookside Senior Living. Funeral services will be held on Tuesday, November 12th at 1:30 pm at Our Savior's Lutheran Church. Visitation will be held from 5 to 7 pm Monday... View Obituary & Service Information

The family of Kenneth Tostenson created this Life Tributes page to make it easy to share your memories.

Send flowers to the Tostenson family.