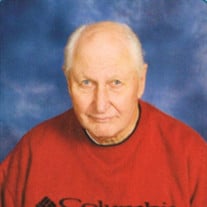 Kenneth Duane Madsen was born on January 23, 1930 in Russell, Minnesota, to Hjelmer and Ester (Swenson) Madsen. He was baptized and confirmed in the Lutheran faith. Ken attended school in Granite Falls and graduated from Granite Falls High School in 1949. After high school he enlisted in the United State Air Force and honorably served our country during the Korean Conflict. Ken received both the Korean Service Medal and also the United Nations Service Medal. He was honorably discharge on December 9, 1952. Ken married his high school sweetheart, Joan Nesburg on June 30, 1950, at the Granite Falls Lutheran Church. They started their life together in Tacoma, Washington while Ken was serving. They returned to Minnesota in 1952 and made their home in the Granite Falls area. Ken did various over the road driving including, construction, having his own milk collection truck and route and then Schwann’s over the road except for a few states. A few of the construction companies he worked for included Mooney’s Construction, Viessmann’s Trucking and Arneson’s Trucking. Ken was a member of the Granite Falls VFW and the Granite Falls American Legion Post 69. He was also a member of the Sunset Masonic Lodge 109 A.F. and A.M. and a Son of Norway. Ken enjoyed the outdoors, hunting, fishing, and then making his own jerky from the game he caught. He lived an honest and honorable life, with his motto being, “you never go back on your word.” Ken died peacefully at Avera Granite Falls Care Center on Tuesday, November 3, 2020 at the age of 90 years, 9 months and 10 days. Ken is survived by his sons, Charles “Chuck” (Gary Hart) Madsen of Minneapolis and Robert Madsen of Minneapolis; grandchildren, Kristin (Jake) Nicoson, Matthew Madsen; great grandchildren, Cole and Bryn Nicoson; Ken’s significant other, Darlene “Dar” Hanson of Granite Falls; sisters, Carol Jensen of Texas, Mary (Larry) Halvorson of Edina, Joyce (Michael) Cicura of Minneapolis; as well as nieces, nephews, other relatives and friends. Ken was preceded in death by his wife, Joan in 2004; son, Mark in 2014; parents, Hjelmer and Ester Madsen; brother, Howard (Jean) Madsen; sister, Phyllis Falnes.

Kenneth Duane Madsen was born on January 23, 1930 in Russell, Minnesota, to Hjelmer and Ester (Swenson) Madsen. He was baptized and confirmed in the Lutheran faith. Ken attended school in Granite Falls and graduated from Granite Falls High... View Obituary & Service Information

The family of Kenneth Madsen created this Life Tributes page to make it easy to share your memories.

Send flowers to the Madsen family.