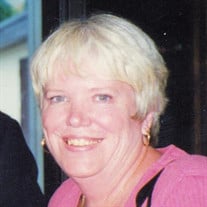 Kathleen Jean O’Connell was born June 24, 1947, in St. Paul, Minnesota to Thomas and Jean (Dalglish) Rafftery. Kathleen was baptized as an infant and in 1951 her family moved to the St. Columba Catholic parish where she attended school thru the 8th grade and was confirmed there. She went to St. Joseph’s Academy for high school and graduated in 1965. Kathy began working at the Minnesota Department of Taxation in St. Paul and it was here she met the love of her life, Steve. Kathy and Steve were married on September 14, 1968, at St. Columba in St. Paul. In 1969, the couple moved to Montevideo and began a family. They were blessed with three children, Therese, Shawn and Colleen. Kathy enjoyed a variety of odd jobs while the children grew up which allowed her to focus on her family. When the children were older, she went back to school for an accounting degree from Granite Falls Technical College. Kathy began working at Fagen Inc, and continued there for over 15 years. Kathy loved gardening, her wealth of knowledge was immense and you could tell by the flowers she grew. She enjoyed bowling, shopping, playing cards and gambling. Kathy and Steve enjoyed traveling together and took several trips to Vegas and numerous cruises. Her family was her world and her granddaughters were the light of her life. Kathy heart was kind, generous and empathetic. Kathy is survived by her husband, Steve O’Connell of Montevideo; children, Therese (Jerry) Scharrer of Deerwood, Shawn (significant other, Elizabeth Hammer) O’Connell of Phoenix, AZ, Colleen O’Connell of St. Paul; granddaughters, Kaitlyn (fiancé, Jacob Kayfes), Emily (special friend, Gabe Ryappy) Scharrer; sisters, Peggy (Gene) McCracken of Gallina, NM, Patty (Tim Meath) Rafftery of St. Paul; brothers and sisters-in-law, Terry (Jane) O’Connell of Eau Claire, WI, Kevin (Diane) O’Connell of Wausau, WI, Gale O’Connell of Elk Mound, WI; as well as many nieces, nephews, other relatives and friends. Kathy was preceded in death by her parents, Thomas and Jean Rafftery; father and mother-in-law, Vince and Leona O’Connell, brother-in-law, Tim O’Connell; sister-in-law, Patricia (Bob) Devney. In lieu of flowers, please make a donation to Chippewa County Food Shelf.

Kathleen Jean O&#8217;Connell was born June 24, 1947, in St. Paul, Minnesota to Thomas and Jean (Dalglish) Rafftery. Kathleen was baptized as an infant and in 1951 her family moved to the St. Columba Catholic parish where she attended school... View Obituary & Service Information

The family of Kathleen O' Connell created this Life Tributes page to make it easy to share your memories.