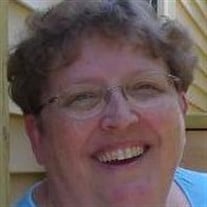 Kathleen Ann Dieken Niemeyer was born on November 11,1951, to Arthur & Marion (Gerdes) Dieken in Montevideo, Minnesota. She grew up on the family farm south of Clara City. She graduated from the Clara City High School in 1969. She married Daryl Niemeyer on May 14, 1977, and to this union, one son, Joel was born. They made their home in Clara City. Kathy was a life-long member of Immanuel Lutheran Church, baptized there on December 2, 1951, confirmed on April 3, 1966, faithfully serving with Immanuel’s Women including several terms as their President, as well as four terms as the WELCA Treasurer. She also served as Immanuel Lutheran’s Treasurer for 9 years, was a Sunday School teacher and helped with the Greeting Card Committee for over 30 years. After getting her nursing license, she worked for the St. Louis Park Medical Center (now renamed Park Nicollet) for over two years, Rice Memorial Hospital for over 9 years and the Clara City Care Center for 17 years after which her health forced her to retire from nursing. She then was employed as the Secretary at Immanuel Lutheran Church for over 18 years. She also decorated many wedding cakes and enjoyed making wedding floral corsages and arrangements in her spare time. Kathy enjoyed having people over for a meal, tea, or just conversation. She was an avid photographer, loved to cook, sew, read a good book, or just to anything…proved by the many projects she had going at one time! She had a special knack for writing. People waited all year for her annual Christmas letter. Daryl and Kathy were fortunate to travel quite a bit through their lifetime, seeing many beautiful places and enjoying time together. But her absolute MOST favorite thing to do was spend time with her ‘girls’…Isabelle and Arielle. They were, and always will be, her princesses. Kathy is survived by her husband Daryl of Clara City; son Joel (Amy) and granddaughters Isabelle Rose and Arielle Kaleen all of Hutchinson; her sister Karen (Jerry) Bents of New London; brother Bob (Geraldine) Dieken of Clara City; sister-in-law Verlma (Tim) Murphy of Palisade, Minnesota; and several nieces, nephews and extended family and friends.

Kathleen Ann Dieken Niemeyer was born on November 11,1951, to Arthur & Marion (Gerdes) Dieken in Montevideo, Minnesota. She grew up on the family farm south of Clara City. She graduated from the Clara City High School in 1969. She married... View Obituary & Service Information

The family of Kathleen Niemeyer created this Life Tributes page to make it easy to share your memories.

Send flowers to the Niemeyer family.