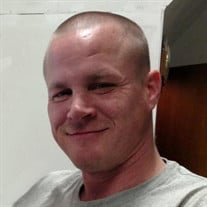 Justun Wanke, age 39, of Montevideo passed away on Saturday, July 4, 2020 at his home. Memorial Service will be held on Saturday, July 11, 2020 at 2:00 p.m. at Kviteseid Lutheran Church in Milan. Social Distancing will be followed and face masks are encouraged. Interment followed at the church cemetery. Justun James Wanke was born on August 18, 1980, in Montevideo, Minnesota the son of Dennis and Rhonda (McTighe) Wanke. He was baptized on December 24, 1980 at Kviteseid Lutheran Church. Justun received his education in Montevideo and graduated with the Montevideo High School Class of 1998. Justun was a determined, hard-working man. At 13, he started his first job cleaning fish tanks. At 14, he interviewed at Dairy Queen; he failed to mention his age and was hired anyways because of his dependability and good ethics. Justun purchased his own home at the young age of 18. He also worked at Red Owl. After this he went on to drive for Village Hearth and lovingly became known as the “Bread Man.” One year on his route, he sold Girl Scout cookies to his customers. His nieces were the top sellers that year! This helped him land a sales position as a financial representative for Country Financial, earning many rewards. Justun furthered his career by starting a successful taxi service with his mother Rhonda, known as Turbo Taxi. Together they also purchased a building in downtown Montevideo to renovate for office spaces. Justun, his mom and nephew worked many hours to get it where it is today! Another side business is Jrt.product.inc, an online sales venture that Justun started in 2020. It featured local businesses as well as products for sale. Justun loved to fish, camp, play pool, canoe, ride his motorcycle and spend time with family and friends. He was always trying to make people smile and laugh with his quick-wittiness. Justun was the cook at family gatherings. He carried on a bean recipe favorite from his father, Denny, that many people requested he make. Justun was very considerate and thoughtful of everyone, always going above and beyond for anyone he met. He loved to make people smile and laugh with his hilarious jokes and comical character. He had a very sociable and likeable personality. He will be greatly missed by many! Justun is survived by mother, Rhonda Wanke of Montevideo; sister, Tonya (Danny) Sinner of Buffalo; brother, Jason Wanke of Montevideo; paternal grandmother, Arlene Wanke of Montevideo; nieces and nephews, Alexander Olson of Buffalo, Tyler (special friend, Faith Brunk) Olson of Montevideo, Morgan Streed of Buffalo, McKenzie Streed of Buffalo, Jadon Saxton of Buffalo, Jackson Wanke of Cumberland, WI, Kamry Wanke of Cumberland, WI, Rocky Sinner of Buffalo, River Sinner of Buffalo; as well as many aunts, uncles, other relatives and many dear friends. Justun is preceded in death by his father, Dennis Wanke; infant brother, Justin Wayne Wanke; grandparents, Wayne and Fran Hastings, Tom Wanke Sr., great uncle, Jim Wanke.

Justun Wanke, age 39, of Montevideo passed away on Saturday, July 4, 2020 at his home. Memorial Service will be held on Saturday, July 11, 2020 at 2:00 p.m. at Kviteseid Lutheran Church in Milan. Social Distancing will be followed and face... View Obituary & Service Information

The family of Justun Wanke created this Life Tributes page to make it easy to share your memories.

Justun Wanke, age 39, of Montevideo passed away on Saturday,...

Send flowers to the Wanke family.