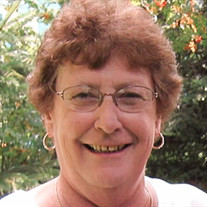 Judy Ann Hustad was born November 1, 1944 in Elkton, SD. She was the youngest of Velma (Johnson) and William Mueller’s seven children. She was baptized and confirmed in the Lutheran faith. She graduated from Worthington High School and lived most of her adult life in Granite Falls on ‘the farm’ in Stony Run Township. Judy married Myron ‘Sam’ Hustad in 1976. Together, at their home, they raised their children Jarrod and Cyan. Judy worked for the city for 38 years and retired as the manager of the municipal liquor store. Before and during her retirement, Judy loved living in the country as it provided her the ability to raise a garden and share the many vegetables she grew and canned. Her Salsa was a favorite of many, and today the recipe resides with just a few family members and close friends. The ‘farm’ also provided her with a great place to host everything from a friendly card game to a family gathering; as well as many great meals shared with family, neighbors and her friends in ‘town.’ She also opened up her home to anyone who wanted to stop in and ‘talk smart’ and have a good laugh during happy times and at those times when life wasn’t exactly what you were expecting. This activity didn’t stop until the morning that she passed. She would have wanted to thank the many neighbors and friends who made it possible for her to stay on her ‘farm’ until the last. Thank you all. Judy enjoyed traveling to warmer destinations in the winter. Florida was a favorite place to get some sun while visiting grandchildren Emily and Kaitlyn at Cyan and her husband Tom’s home. She also liked to pass on her skills in the kitchen to granddaughter Karalyn and watch a few games of baseball when grandson Jake was behind the plate during a visit to Plymouth to see Jarrod and Diane. Judy is survived by her son Jarrod and his wife Diane, grandchildren Karalyn and Jakob; daughter Cyan and her husband Tom Zieske, grandchildren Emily and Kaitlyn. She also is survived by her brother Alvin (Karen), Council Bluffs, IA; sister Delores DeVos, Keller, TX; brother Darrell (Marlene), Worthington, MN and Donald (Mary), Rushmore, MN. Preceding her in death were her parents, husband Myron, and brothers William Jr. and Lyle.

Judy Ann Hustad was born November 1, 1944 in Elkton, SD. She was the youngest of Velma (Johnson) and William Mueller&#8217;s seven children. She was baptized and confirmed in the Lutheran faith. She graduated from Worthington High School and... View Obituary & Service Information

The family of Judy Hustad created this Life Tributes page to make it easy to share your memories.

Send flowers to the Hustad family.