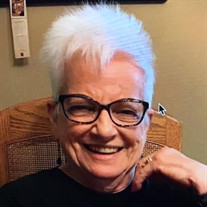 Jowane Howard, 83, passed away on May 2, 2020 at the Northfield Hospital. Memorial Services will be held Saturday, September 19, 2020 at 2:00 PM at St. Luke’s Church in Faribault, Minnesota. A Graveside Service will be Sunday, September 20, 2020 at 11:00 AM at the Sunset Memorial Cemetery in Montevideo. Jowane Marie Routier Howard was born in Blue Earth, July 8, 1936, daughter of Howard and Jane Routier. The family moved to Delavan in 1951 where she graduated from high school in 1954. Following graduation, she worked in Minneapolis until her marriage to her one and only beloved Oliver Carlton Howard in October 1955. They lived in various locations while Oliver worked with the Howard Construction Company, ending up residing in Montevideo for 15 years. At 38, Jowane was widowed. She ran the construction business for a time, put herself through cosmetology school, owned & operated her Hair Hut Salon & raised her two girls. From there she moved to Northfield where she was an Administrative Assistant for different departments at St. Olaf College and then worked at her beloved St. Luke’s Church in Faribault. At 80, Jowane graduated from Village Schools of the Bible - a long time dream she fulfilled. Jowane is survived by her loving daughters, Brenda Larson and special friend, Dave; Amy Jo Howard and special friend, Greg; grandchildren Cal (Amy) Larson, Maddie (Josh) Fischer, Austin (Hannah) Schmitt, Stephanie Schmitt, Casey Schmitt; great grandchildren Henry, Hannah, Aspen, and Sawyer; sister Vanette (Dave) Pope, brother Ralph (Janet) Routier and many nieces, nephews, cousins, special friends and her silly beloved dog BayaMay. She was preceded in death by her loving husband, Ollie, in 1974, parents Howard and Jane Routier and parents-in-law Floyd and Olga Howard.

Jowane Howard, 83, passed away on May 2, 2020 at the Northfield Hospital. Memorial Services will be held Saturday, September 19, 2020 at 2:00 PM at St. Luke&#8217;s Church in Faribault, Minnesota. A Graveside Service will be Sunday, September... View Obituary & Service Information

The family of Jowane Howard created this Life Tributes page to make it easy to share your memories.

Send flowers to the Howard family.