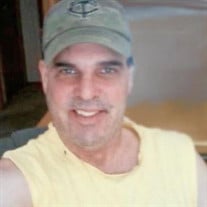 Jon Albert Nerison of Montevideo, Minnesota passed away at age 60 at his home in Montevideo on April 12, 2022. The legendary Jon aka Animal aka Neri was a known rebel with a big heart. He would do anything he could to help those he loved. And if you were lucky enough to be loved by Jon you were loved fiercely and deeply. Jon is survived by his children, Jocelyn Lee (Jesse), Joshua Nerison, Shantel Syring (Junior), and Sam Maxis, 9 grandchildren, Ariana, Carter, Drew, Kendra, Trinity, Ella, Dominic, Jorge and Harper. Siblings, James Nerison, Diane Doring, Trudy Johnson (Steve), Marsha DuHoux (Bill), Bob Nerison, and Mary Jo Killebrew (Kenny). Many very special nieces and nephews and life long friends, special friend, Julie and his best pal Gizzy, his cat that he rescued. Born August 29, 1961 to Joyce and Norman Nerison in Granite Falls, Minnesota. Jon graduated from Montevideo High School in 1979. He enlisted in the army after school and was honorably discharged a year later for medical reasons. Jon spent his life doing things he loved. Spending time with family and friends, biking, golfing, cooking, gardening, NASCAR, football, baseball, and was very proud of his Norwegian heritage. He was an incredibly smart, deep and complex man. Jon was tough on the outside and a teddy bear on the inside with an especially soft spot for animals and children. A loving son, a relentless at teasing brother and uncle, a friend to many, a proud father and grandpa. Eager to boast about his children and grandchildren and share photos. A defender of the underdog and an enemy to bullies. His love was as big and booming as his voice. The first one to send a happy birthday message and let you know he was thinking about you. Always standing up for what he believed in and vigorous debater. Between Jon’s masterful storytelling skills and debates, conversation was never dull. Jon is preceded in death by his parents, brother in-law, Curtis Doring, and sister in-law, Gloria Nerison. His loss is felt deeply by all those that loved him of which there are many. A Celebration of Jon’s Life will be held Saturday, April 23, 2022 from 1:00 – 5:00 PM at Hollywood on Main in Montevideo. Donations in lieu of flowers may be sent to The American Lung Association https://action.lung.org Arrangements are with the Wing-Bain Funeral Home of Montevideo. For online guestbook, please visit www.wingbain.com

Jon Albert Nerison of Montevideo, Minnesota passed away at age 60 at his home in Montevideo on April 12, 2022. The legendary Jon aka Animal aka Neri was a known rebel with a big heart. He would do anything he could to help those he loved. And... View Obituary & Service Information

The family of Jon Nerison created this Life Tributes page to make it easy to share your memories.

Jon Albert Nerison of Montevideo, Minnesota passed away at age...

Send flowers to the Nerison family.