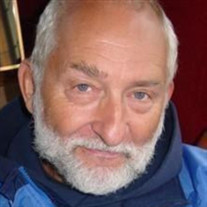 Jon Hall,79, of Granite Falls, passed away on Sunday, March 28th at the St. Cloud Hospital. Jon Bradford Hall was born on January 2nd, 1942 to Manford and Erleen Hall of Golden Valley, Minnesota. He graduated high school in Leonia, New Jersey and received his degree in psychology from California State University, Fullerton. Jon’s last earthly hours were spent with his family who loved him dearly as he went to his heavenly home on the early hours of March 28th, 2021. Jon lived a life of adventure and servitude from bodybuilding in California: to a lumberjack, teacher, third party politician, and dairy farmer in Bemidji, Minnesota. In the early 90's he settled into the Granite Falls area to be close to family. He was extroverted and loved to talk, and he often researched new conspiracy theories because his other ones came true. Life wasn’t boring to Jon. His love for culture, art, and people inspired him to travel the world but also enjoy the simple things like: art showing, gardening, lawn mowing, giving, and enjoying time with his children and grandchildren. His life was fully lived and his big heart will be forever cherished in ours. Jon is survived by his siblings: Barbara (Paul) Britain, Bill (Fredda) Hall, Bonnie Olson, and Becky (Clarence) Fisher. His former wives/dear friends: Connie Hall and Katia Andreeva. His children: Mike Freedom, Cliff Hall, Vanessa (Chad) Torke, Derek Hall, and Brandon Hall. His Grandchildren: Chloe, Faith, and Ryder Torke, Sophia and Viktor Hall, and Caden Hall. He was preceded in death by his parents and grandparents. A life celebration honoring his life and legacy will take place from 1 to 4 pm on Saturday, June 19th at Winter Park in Granite Falls, Minnesota

The family of Jon Hall created this Life Tributes page to make it easy to share your memories.

Send flowers to the Hall family.