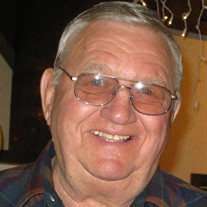 John Leroy Ruether was born on June 22, 1935, in Madison, MN, to Joseph and Josephine Ruether. He was baptized and confirmed at St. Michael’s Catholic Church of Madison. John grew up and went to school in Madison until the 10th Grade, when he left for the oil fields of Montana to earn money for his parents. Upon his return, John proudly served his country in the Army Reserves as a tank gunner in an Armor Unit, and was honorably discharged in 1961. On October 26, 1957, John was united in marriage to Janet Moe. To this union, four children were born: Jim, Jeanne, Joy and Jodi. Over the years, John worked for Olson Trucking as a livestock hauler, Milwaukee Railroad as a fireman, John Larson’s garage as a mechanic, and Duininck Brothers as a heavy equipment operator and mechanic. In 1973, John co-founded Ruether Bros. Garage with his brother Don, bought Don out in 1990, and sold the family business to his son, Jim, in 2001. John loved motorcycling, snowmobiling, boating, stockcar racing (Little Johnny Ruther [sic] in Car #22) – anything that would go fast. He also loved horses and flying his airplane. Many flights to Alexandria for breakfast, flying up to the lake cabin, or just taking the kids up when they were home on the weekends. John also enjoyed pheasant and deer hunting. John valued time spent with his family, and was a devoted and dedicated Catholic. He served many years on St. Joseph’s Church Board and was a member of the Knights of Columbus. John was also a member and an officer of the Montevideo American Legion Post 59. John died peacefully at home on December 1, 2019, after a long battle with dementia. He attained the age of 84 years, 5 months, and 9 days. John is survived by his loving wife of 62 years, Janet; his son Jim (Lori) Ruether of Montevideo, MN; daughters, Jeanne (Dennis) Giaimo of Appleton, WI, Joy (Jerry) Kack of Montevideo, MN, and Jodi (Tim) Dittes of Appleton, MN; 9 Grandchildren – Jamie (Jon) Bohner, Shane (Madi) Ruether, Tyler (Kenzie) Ruether, Thomas Giaimo, Andrew (Geneva) Giaimo, Halle Giaimo, Jett Kack, Jessa Kack, and Jourdan Erickson; 7 Great Grandchildren – Jaden, Jalissa, Jaylee, Mason, Jax, Tegan, and Avery; 3 brothers – Wayne (Carol) Ruether of Appleton, MN, Greg Ruether of Appleton, MN and Larry (Dawn) Ruether of Alexandria, MN; 3 sisters – Gail Baldwin of Montevideo, Carolyn (Leonard) Meyer of Appleton, MN, and Mary (Charles) Kelly of Coon Rapids, MN; Sister-in-Law Diane Ruether of Montevideo; and many nieces and nephews. John was preceded in death by his parents, his brother Donald Ruether, sisters Arlene (Jerry) Albrecht and Jeanette (Virgil) Sachs; and his grandsons Jonathon Erickson and Anthony Dittes. Blessed be the memory of John Ruether.

John Leroy Ruether was born on June 22, 1935, in Madison, MN, to Joseph and Josephine Ruether. He was baptized and confirmed at St. Michael&#8217;s Catholic Church of Madison. John grew up and went to school in Madison until the 10th Grade,... View Obituary & Service Information

The family of John Ruether created this Life Tributes page to make it easy to share your memories.

Send flowers to the Ruether family.