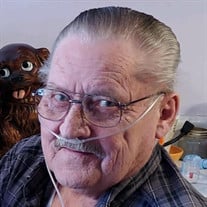 John Joseph Buysse was born on August 11, 1944 in Marshall, MN, the son of Leo and Mary (Vandendries) Buysse. He attended school in Luverne, MN and graduated and enlisted in the Marines in 1962. John served in the Marine Corps from 1962 to 1966. At the age of 22 he was awarded the Bronze Star for valor in combat at the Legion hall in Luverne, MN. After his honorable discharge from the Marine Corps in 1966, he went on to work for the Luverne Creamery and met Sharrel (Sherry) Hoffman from Hills, MN. They were married on November 12, 1966, and moved to Lomita, California where John worked as a wastewater treatment operator. In 1980 they decided to move back home to Minnesota with their children. They made their home in Granite Falls and he worked for the City of Granite Falls until his retirement in 2009. Retirement was not all rest for John, and he worked more after retiring than before. He was a handyman, helped at farms, and took care of homes for people when they were away. Keeping busy was his passion. John enjoyed fishing, playing Buck with friends, and spending time with family and friends. He especially loved spending time with his grandchildren, Samantha and Steven, and his great-grandchildren. On Monday, April 6, 2020, John passed away peacefully with his children at his side at the age of 75. For the last few years, he had battled with lung issues, and after putting up a very courageous fight until the end, he was called home. John is survived by his children: Charisse Meyer of Tyler, MN and Joshua (Terri) Buysse of Minneapolis, MN and 2 grandchildren: Samantha (Ben) Schulte of Canby, MN and Steven Meyer of Yankton, SD and also 5 great grandchildren: Chad, Katlyn, Sierra and Alec Schulte and Natalie Meyer of Canby, MN. He is also survived by his siblings: Ann (Art) Lonneman of Luverne, MN; Marlene (Bob) DeSplinter of Luverne, MN; Rick Buysse of Luverne, MN and Mike (Patty) Buysse of Lismore, MN, sister-in-law Brenda Buysse as well as numerous nieces, nephews, cousins and other family members. He was preceded in death by his wife Sherry Buysse, his parents, Leo and Mary Buysse and a brother, Ronald Buysse of Spartanburg, SC.

John Joseph Buysse was born on August 11, 1944 in Marshall, MN, the son of Leo and Mary (Vandendries) Buysse. He attended school in Luverne, MN and graduated and enlisted in the Marines in 1962. John served in the Marine Corps from... View Obituary & Service Information

The family of John Buysse created this Life Tributes page to make it easy to share your memories.

Send flowers to the Buysse family.