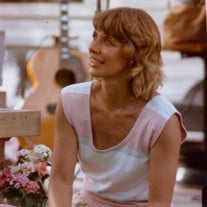 JoAnn Irene Pederson, age 68, of Granite Falls passed away surrounded by her loving family on Tuesday, May 19, 2020 at her home. A celebration of life ceremony will be planned and held at a later date. JoAnn was born on October 7, 1951 in Farmington, Minnesota to Howard and Esther (Swedin) Stanke of Elko, MN. She grew up in that area, where she graduated from Lakeville High School with the Class of 1969. JoAnn furthered her education by attending nursing school at Fairview School of Nursing and became a Registered Nurse. Jo enjoyed caring for others which was evident in her choice of career. She began working at Fairview Medical Center, first in Pediatrics and later in the adolescent Psychiatric unit, soon becoming a Head Nurse. Later, she worked at the Upper Sioux Community as an RN and was a hospice nurse for Granite Falls Hospital. She spent some time at Countryside Public Health in Granite Falls and at long term and assisted living centers in Clara City. Jo finished her nursing career at the Avera Marshall Regional Medical Center back in the field she liked best on the Adult Psychiatric unit. It was at Fairview that Jo met her husband, Dale Pederson and they were married on June 17, 1984 at Dale’s parents’ farm in Stony Run Township. This was also the time that the couple moved to rural Granite Falls, building a house on a piece of the family farm. They have called this home ever since. Of equal importance to her work life was involvement in community, environmental and cultural projects. She was a founding member of the Clean Up The River Environment (C.U.R.E.) Board of directors and of the Meander Art Crawl Steering Committee. It was in these settings where she developed a reputation for her wise counsel, her gentle humor and her commitment to finding a path that everyone could walk down together. She understood people and demonstrated the strength of character she brought out in others. Out of a desire to maintain and build ties between friends and neighbors she started a weekly summer evening pot luck. And even though Dale could be heard to grumble “ why on earth would anyone want to come over here every week’’ he eventually acknowledged sharing meals, stories, tears and laughter staying connected to people was one of her better ideas. Jo was an artist. Her aesthetic was simplicity. Her lines were clean and direct. She knew how she wanted things to look and she manifested beauty with her knitting, baskets, bead work, stained glass, home décor, and the rustic furniture she and Dale produced and sold at Art Fairs around the Midwest. She was an avid reader of fiction, non-fiction, history, biographies and poetry and as a result a wide ranging conversationalist. She liked to pull out her accordion when the mood struck her and play the Blue Skirt Waltz and other tunes she and her sister Jean learned from their “Auntie Lois” that reminded her of her roots in Elko. Or, especially when the kids were young, play them favorite folk songs on the piano or guitar. After retirement she relished more time with the plants and flowers in her gardens and tending her grapes and the vines that bore them in her vineyard. Jo cherished a rich childhood with her parents and her sister Jean, along with numerous relatives. Her life was blessed with five amazing children, Ryan, Rachel, Kristin, Sean and Jessica, who she called “the great love of her life”. And then, “the best reason to be a parent”, the grandchildren. Family was the most important element in Jo’s life, and it grew to include her dear friends “The Bridge Club”, “The Book Club”, and “The Gathering Crew”. Her love, care and thoughtfulness was absolutely boundless to those in her world. Though her last years were challenging they are without doubt the most inspiring to those who knew and will miss her most. She fought hard with a quiet strength, grace and spiritual calm to share her love to the fullest in the time she had without complaint, saying simply ‘’this is the road we’re on’’. We will each be forever grateful for every step we traveled it with her. JoAnn is survived by her husband, Dale; children, Ryan Christopher Larson, Rachel Jean McDougall, Kristin Ann (Jayson) Babler, Sean Eric Pederson, Jessica Marie Pederson; grandchildren, Allie Jo McDougall, Liam Jayson Babler, Emma Irene Babler; mother, Esther Stanke; mother-in-law, Joyce Pederson; sister, Jean (Rich) Garlock; niece, Lindsay (Ben) Lumpkin; as well as other relatives and friends. JoAnn was preceded in death by her father, Howard Stanke and father-in-law, Charles Pederson.

JoAnn Irene Pederson, age 68, of Granite Falls passed away surrounded by her loving family on Tuesday, May 19, 2020 at her home. A celebration of life ceremony will be planned and held at a later date. JoAnn was born on October 7, 1951 in... View Obituary & Service Information

The family of JoAnn "Jo" Pederson created this Life Tributes page to make it easy to share your memories.

Send flowers to the Pederson family.