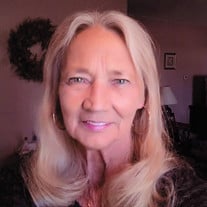 JoAnn Gunder was born on August 11, 1948 in Kansas City, Missouri, the daughter of Robert and Leah (Hackett) Rhodes. She was baptized and confirmed in the Lutheran faith at Mount Olivet Lutheran Church Minneapolis, Minnesota. JoAnn grew up in Pennsylvania and started school there until moving to Minnesota where she later graduated from Washburn High School in 1967. On October 20, 1967, JoAnn was united in marriage to David Gunder in San Diego, California where David was station in the service at the time. The couple were blessed with three children, Leah, Lori and Linda. In 1968, they moved back to the metro area in Minnesota until 2011 when they found a home in Wood Lake. JoAnn loved being a wife, mom and caring for her family as it grew to include grandchildren and great grandchildren. She was a member of Job’s Daughters and treasured her Native American ethnicity. JoAnn traveled often to take in many Pow Wows and other native ceremonies. She enjoyed gardening, taking pictures, going to museums to expand her knowledge of history and valued any time she spent in nature. On Monday, July 8, 2019, JoAnn passed away at Granite Falls Hospital. She reached the age of 70 years, blessed be her memory. Surviving family include her husband, David of Wood Lake; daughters, Leah Cordts, Lori (Melvin Hair) Waller of Sioux Falls, SD, Linda (Mike Murray) Gunder of Chaska; grandchildren, Brandon Branson, Sean Grube, Aaron Grube, Andrew Waller, Ashley Gunder; great grandchildren, Brantley Gunder and Alexis Branson; brother, Jerry Rhodes; sisters-in-law, Deborah Gunder, Teresa (Dale) Norwood, Kathy (Frank) Earnhardt; as well as nieces, nephews, other relatives and dear friends. JoAnn was preceded in death by parents, Robert and Leah Rhodes; father and mother-in-law, Bill and Dorothy Gunder.

JoAnn Gunder was born on August 11, 1948 in Kansas City, Missouri, the daughter of Robert and Leah (Hackett) Rhodes. She was baptized and confirmed in the Lutheran faith at Mount Olivet Lutheran Church Minneapolis, Minnesota. JoAnn grew up... View Obituary & Service Information

The family of JoAnn Gunder created this Life Tributes page to make it easy to share your memories.

Send flowers to the Gunder family.