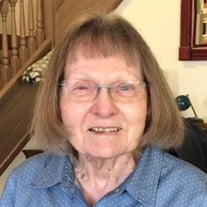 Joan Hildahl, age 85, of Montevideo, passed away on October 16, 2021 at Luther Haven Nursing Home in Montevideo. A Funeral Service will be held on Monday, October 25, 2021 at 10:30 AM at Wang Lutheran Church rural Maynard. Visitation will be held on Sunday, October 24, 2021 from 3-5pm at Wing-Bain Funeral Home in Granite Falls, and one hour prior to the service at the church. Interment will follow in the church cemetery. Joan Lena Hildahl was born on May 21, 1936, to Oscar “Okie” and Gladys (Strandjord) Johnson at their homestead in Sacred Heart, Minnesota. She was baptized and confirmed at Our Savior’s Lutheran Church in Sacred Heart. Joan was active in cheerleading and graduated from Sacred Heart High School in 1954. Joan was united in marriage to Marvin Ellingboe on August 25, 1956 at Wang Lutheran Church. The couple began their life together farming on Marvin’s homestead. They were blessed with three children, Brad, Debbie and Dean. When she was pregnant with Dean, Marvin died tragically in a farming accident. Joan then moved her family to Granite Falls. On June 7, 1969, Joan married Howard Hildahl in Granite Falls, Minnesota where they owned a Coast-to-Coast store for a short time before moving to a farm place near Clarkfield. Joan lived there until Howard’s death, when she moved to Willmar. After moving to Willmar, she became involved in the Senior Center and especially enjoyed bowling. Joan was a wonderful homemaker to her family. She enjoyed sewing and made alterations, bridesmaid dresses, even sewed a wedding dress! Joan worked for years at Clarkfield Outdoors as a seamstress. She valued her faith and would volunteer to the Ladies Aid organizations to her church. Joan faced many hardships thru the years, losing two husbands and two children, but she will be remembered for her kindness and gentleness that shined through. She had a quiet strength that her family relied on. Joan’s hobbies centered around her love of sewing, cooking, baking, and family. She enjoyed making her home welcoming to others. Joan is survived by her son, Dean (Nancy Aagesen) Ellingboe of Montevideo; grandchildren, Cass Ellingboe, Cole Ellingboe, Jesse (John) Ellingboe Ender, Tyler (Katie) Ellingboe, Jonathan (significant other, Vivian Coulter) Ellingboe, Nicole (Lehi) Aagesen Smith, Christopher (fiancée, Sarah Rubertus) Aagesen; great grandchildren Taylor Brook, Ariella and Alina Ellingboe, Van Ellingboe, Finley Smith, and another great-child due in March 2022; sisters, Gleva Krause, Becky (Truman) Homme; brothers and sisters-in-law, Marvin (JoAnn) Hildahl, Joyce (David) Offerman, Rodney Hildahl; as well as nieces, nephews and other relatives. She was preceded in death by her husbands, Marvin Ellingboe, Howard Hildahl; daughter, Debbie Ellingboe; son, Brad Ellingboe; nephew, Curtis Johnson; brothers, David, Richard, Tom, Orland and James.

Joan Hildahl, age 85, of Montevideo, passed away on October 16, 2021 at Luther Haven Nursing Home in Montevideo. A Funeral Service will be held on Monday, October 25, 2021 at 10:30 AM at Wang Lutheran Church rural Maynard. Visitation will... View Obituary & Service Information

The family of Joan Hildahl created this Life Tributes page to make it easy to share your memories.

Send flowers to the Hildahl family.