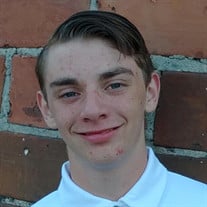 Jesse Smith, age 15, of Echo passed away on Saturday, February 19, 2022, at his home. A Celebration of Jesse’s Life will take place Friday, February 25, 2022 at 2:00 PM at the Granite Falls Lutheran Church, interment will follow in the Granite Falls City Cemetery. Visitation will be held on Friday, from 12:30 PM to 2:00 PM at the church. Jesse Vance Smith was born on September 26, 2006, in Fort Carson, Colorado, the son of Justin and Kizar (Baker) Smith. From a small child, Jesse loved to talk and be the center of attention. He loved Thomas the Train and making others smile. Being born to a military family, Jesse has seen many places most his age have not. He started elementary school in Colorado and when the family moved to Palmer, Alaska he was enrolled in a school for the gifted so he could excel, which he did. Jesse and his family moved to Missouri where he attended middle school and his love of band and robotics was ignited. He began playing baritone and tuba while working with the robotic team. In 2020, the family moved to Granite Falls and Jesse attended YME. He enjoyed mathematics, science and most recently started exploring more of the computer science, he could even help the IT guy at school. His interest of how things worked lead him to join the local robotics team and he thoroughly enjoyed not only building things but sharing his knowledge with others even those younger than himself. Jesse was talented in being able to help others understand complex things. Jesse’s passion for band continued to grow at YME and he rarely missed a practice. In addition to him playing tuba at band, he joined jazz band and pep band and learned another instrument, the trombone. He loved playing for pep at all the local games. Jesse was on the honor roll and will be remembered for the time he would take to help others; he truly cared for those around him. He was a member of the Boy Scouts and received his STAR rank. Jesse worked at the Granite Falls Dairy Queen and he enjoyed creating different variations to try, his family often being the recipients of his experiments. Jesse’s sights were set on going to West Point and from there becoming an engineer and most likely move to Alaska, which was by far his favorite place. Jesse is survived by his parents, Justin and Kizar Smith of Granite Falls; brother, Joshua Smith; sister, Kyla Smith; maternal grandparents, Floyd and Sue Baker of Echo; paternal grandparents, Dennis (LuAnn) Smith of Granite Falls, Rita Stromstad of Granite Falls, Shelly (Steve) Nolan of Longmont, CO; great grandfather, Harold Smith of Onamia; aunts and uncles, Rhiannon Baker of Memphis, TN, Seth Deaton of Memphis, TN, Aaron (Danielle) Smith of Granite Falls, Brad (Wendy) Buysee of Mitchell, SD; as well as cousins, other relatives and friends.

Jesse Smith, age 15, of Echo passed away on Saturday, February 19, 2022, at his home. A Celebration of Jesse&#8217;s Life will take place Friday, February 25, 2022 at 2:00 PM at the Granite Falls Lutheran Church, interment will follow in the... View Obituary & Service Information

In lieu of flowers, memorial are preferred.

Jesse Smith, age 15, of Echo passed away on Saturday, February...

Send flowers to the Smith family.