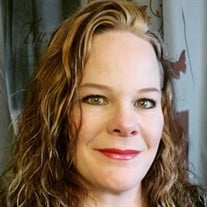 Jeannie Waltz, age 48, of Clara City, Minnesota passed away Tuesday, January 18, 2022. A Memorial Service will be held Saturday, January 29, 2022 at 12:00 Noon at Bethany Reformed Church. Interment will take place in the Spring. Visitation will be Saturday, January 29, 2022 from 10:00 AM – 12:00 Noon, two hours prior to the service at the church. Jean Ann Waltz was born on February 26, 1973, in Bellflower, California. She was the daughter of Ronald and Patricia (Wilson) Richards. She attended school and graduated from the Katella High School in 1992 and went on to attend Fullerton College. She first became a preschool teacher and also worked as a waitress in her early working career. On January 27, 1996, Jeannie was united in marriage to Larry Cavaness in Santa Anna, California. They started their life together in Costa Mesa, California and welcomed a baby boy, Josh. Life happened and after a while, Larry and Jeannie separated ways. Jeannie met and married Joseph Waltz in 2009 and they were blessed with a baby girl, Linda. Joseph died in 2012 and it was then that Jeannie and Larry found their way back to each other and together they moved to Clara City in 2014. Jeannie worked as a para professional at the MACCRAY High School and later started driving bus for the district. She loved interacting with the kids and having great co-workers only added value to the job she loved. She was a member of Bethany Reformed Church and also an Eastern Star. Jeannie enjoyed crocheting, watching her favorite sports team, the 49er’s and her MACCRAY Wolverines! She liked to go to the range and shoot guns with Larry. She loved photography and was currently taking classes at the New York Institute of Photography. Jeannie furiously loved her family and was an attentive caregiver. She will be remembered for her bubbling nature and strength that got her through many hard times. Jeannie is survived by her son, Joshua (fiancée, Jordan) Cavaness of Willmar; daughter, Linda Waltz of Clara City; mother-in-law, Kathy Cavaness of Clara City; as well as other relatives and friends. Jeannie is preceded in death by her parents, Ron and Pat Richards; husbands, Joseph Waltz, Larry Cavaness; brother, Scott Richards.

The family of Jeannie Waltz created this Life Tributes page to make it easy to share your memories.

Send flowers to the Waltz family.