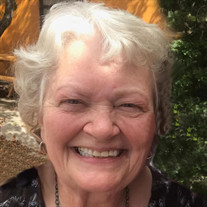 Janis Gabbert, 66, passed away on August 22, 2020 at the lake house in Prior Lake. Memorial Services will be held Friday, August 28, 2020 at 1:00 PM at Smith Park in Montevideo. Visitation will be Thursday, August 27 from 5:00 – 7:00 PM at the Wing-Bain Funeral Home in Montevideo. Janis Marie Gabbert was born on May 1, 1954 in Dawson, Minnesota to Theodore and Alice (Furseth) Ruether. She grew up and attended school in Dawson, had her daughter Jennifer in June of 1971, and then graduated from Dawson High School in 1972. She met and then married Jody Beck in June of 1972 and lived in Montevideo, then later moved to Dalhart, Texas for a few years, and ultimately came back to Minnesota to live. Janis enjoyed raising her six children, Jennifer, Jonathan, Jeanna, Jessica, Joni and Jasmin on the farm but eventually found herself as a single mom. With a determination to make a better life for her kids, Janis went back to Granite Falls Technical College, while working, and amazingly maintained a 4.0 grade point average. Janis worked as an administrative assistant for various businesses over the years including Innovex, First Congregational Church, the Chippewa County Hospital, Prairie Five and most recently the Chippewa County Family Services. She loved her job there and adored her co-workers even more, who she fondly spoke of so often. James Gabbert met Janis at a local establishment in December of 1993. After many failed attempts to obtain a dance, Janis finally agreed to just one dance with Jim, which ultimately brought them to Salem Lutheran Church to be married on April 24, 1999. They have been dancing ever since. They were soul mates and loved to take vacations every year to favorite places like Branson and spend time with family whenever possible. The lake home was a favorite spot to gather. The grandkids were Janis’ pride and joy and if you spent any time at all with her, it was guaranteed you were going to see pictures and videos of them. She loved them so much and just beamed with pride when she talked about them. There truly are no words to express the depth of love Janis had for others. Her giving spirit was so strong and whenever anyone needed anything you can bet she was there. Her husband and family know first-hand how giving, compassionate, strong and just plain awesome Janis was. Her smile lit up an entire room and her hugs were amazing and sincere. She was a true friend. Her compassion was like the deepest river. She loved Jesus with all her heart, and prayers were her specialty. It is thought she had a direct line to God and you can bet none of her friends of family were left out of her prayers each day. If anyone asked her to pray, you never doubted she was right on it. Janis furiously supported the men and women that serve our country. She was a proud American and deeply respected the soldiers that give us our freedoms, law enforcement and first responders. Next to her family, animals were her passion. She had the softest heart for animals, and always had the utmost concern for strays. She was known to feed the handful of cats that came to her deck at night, as well as the occasional possums and raccoons…..which she always texted photos of to her family, proudly saying “look who came to visit”. Her own kitties were her loves and each of them meant so much to her. She also loved each of her “grand pets” so very much. Janis was an advocate of spay/neuter as well as adoption of pets. Janis was everything good about the world and we know she inspired and touched so many hearts along her journey. Janis is survived by her loving husband, Jim Gabbert of Montevideo, MN; children, Jennifer (Michael) Wold of Madison, Jonathan (Cassie) Beck of New Prague, Jeanna (Chad) Simonson of Chanhassen, Jessica (Josh) Beck of Chaska, Joni (Aaron) Friedkin of Ann Arbor, MI, Jasmin (Kyran Huebl) Beck of Denver, CO. Grandchildren, Ava and Austin Beck, Emmett Beck, Everly Huebl, and baby girl to arrive in October, as well as many fur grandbabies; brother, Randy (Patricia) Ruether of Mankato; sister, Phyllis (Gery) Citrowske; Step children Evon (Frank) Kvendru, Darcy Gabbert, James Allen Gabbert; as well as nieces, nephews, other relatives and friends. Janis was preceded in death by her parents, Theodore and Alice Ruether.

The family of Janis Gabbert created this Life Tributes page to make it easy to share your memories.

Send flowers to the Gabbert family.