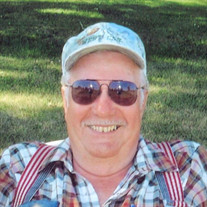 James Van Binsbergen, age 85, of Montevideo, Minnesota passed away Saturday, August 21, 2021 at his home. A Public Visitation will be held Sunday, August 29, 2021 from 5:00-7:00 PM at the Wing-Bain Funeral Home in Montevideo. A Private Family... View Obituary & Service Information

The family of James VanBinsbergen created this Life Tributes page to make it easy to share your memories.

Send flowers to the VanBinsbergen family.