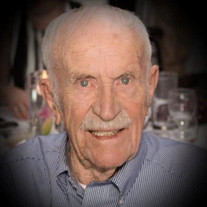 James Obert Finnes, age 90, was born on July 18, 1928 in Granite Falls, Minnesota. He was the son of Obert and Ella (Seim) Finnes and was raised on the Finnes farm in Sioux Agency Township. He was baptized at Rock Valle Lutheran Church and graduated from Granite Falls High School in 1946. In 1950, Jim was united in marriage to Evelyn (Sandy) Sandbaken. He lived in Granite Falls all of his adult life except for the last 4 years, when he and Sandy moved to a care facility in Eveleth, Minnesota, where his daughter Sara lives. Jim passed away on Sunday, April 7, 2019 in Eveleth, surrounded by his family. In Jim’s early years, after serving in the United States Army, at Fort Rucker, Alabama, he returned to Granite Falls, along with his wife and two sons, and began using his skills in several different trades, most of which were sales. Cars, insurance and seed corn were his specialties. When his father retired from farming, Jim farmed the land and later acquired his own hobby farm where he raised geese, sheep, chickens and befriended several cats, dogs, a snake, a llama named, Pablo and a goat named Freida. Always involved in his church and his community, he was most proud to serve as the commander of American Legion, Post #69 for 13 years. Jim was a great storyteller and made friends wherever he went. He lit up a room with his friendly and funny disposition and he will be sorely missed. He is preceded in death by his parents; his wife, Evelyn “Sandy” Finnes; his son, James Mark Finnes; and his brother, Burten Finnes. Jim is survived by his children, Steven (Linda) Finnes of Lakeville, MN; Martha Kelce of Denver, CO; Sara (Doug) Palazzari of Gilbert, MN; Mary Beth (Nick) Molle of Estes Park, CO; Amy (Tim) Tacheny of Richmond, IL.; his grandchildren, Angela, Evan, Laura, Stephanie, Whitney, Morgan, Blake, Drew, Lauren, Claire, Rachel, and Andy; his great grandchildren, Aidan, Anika, Ruby, and Finley; two sisters, Ellen (Dan) Anderson and Mary Ann Anderson. Memorial contributions may be sent to Granite Falls American Legion, Post #69,PO Box 179, Granite Falls, MN 56241, in honor of Jim.

James Obert Finnes, age 90, was born on July 18, 1928 in Granite Falls, Minnesota. He was the son of Obert and Ella (Seim) Finnes and was raised on the Finnes farm in Sioux Agency Township. He was baptized at Rock Valle Lutheran Church and... View Obituary & Service Information

The family of James Finnes created this Life Tributes page to make it easy to share your memories.

Send flowers to the Finnes family.