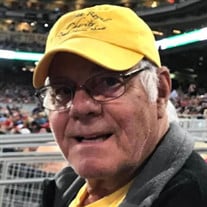 Jack Deuth, age 78, of Montevideo passed away Monday, February 14, 2022, at St. Cloud Hospital. A Memorial Mass of Christian Burial will be held at St. Joseph Catholic Church in Montevideo on Thursday, February 24, 2022, at 10:30 AM with interment following at the church cemetery. Visitation will be held Wednesday from 5-7 PM at Wing-Bain Funeral Home with a Prayer Service at 6:45 PM. Jack Dwaine Deuth, son of John and Verna (Karstens) Deuth, was born on June 5, 1943, in Worthington, Minnesota. He was baptized and confirmed in his faith. Jack attended high school in Tracy, Minnesota until his junior year when his family moved to Lake Wilson, where he graduated high school in 1961. Jack attended Mankato State University and spent his summers working for Appleton Silo Company in Marshall, MN. He then took a job with Chicago Northwestern Railroad working as a lineman, section crew member, and depot agent. Jack enlisted in the United States Marine Corps in 1965 and proudly served his country as an Air Traffic Control Operator. On January 24, 1970, Jack married Patricia Wawers at Tracy Lutheran Church. Shortly thereafter, he was accepted into the Minnesota State Patrol Academy in Arden Hills, MN. Jack was appointed to the Minnesota State Patrol July 1, 1970, assigned to provide security for the State Capitol Complex and Governor’s Mansion. In 1972, Jack and Pat moved to Owatonna where he went on the road for the State Patrol, and five years later settled in Montevideo, serving his community as a State Trooper. Jack retired from the patrol on his birthday, June 5, 1998, enjoying a few weeks off before taking a job for Southwest Driving School teaching hundreds of kids Behind the Wheel training for over 17 years. Jack absolutely loved fishing and got out on the water every chance he could. He enjoyed hunting with family and friends, gardening, cooking, and cruising around the countryside in his beloved yellow Trans Am. He was absolutely thrilled when grandkids started arriving and he loved being called Grandpa! Jack will be forever remembered for his silly sense of humor, lovable laugh, and commonsense approach he always brought to his family and work. Blessed be his memory. Jack is survived by his loving wife, Pat Deuth of Montevideo; children, Sean (Chantel) Deuth of Dawson, Melissa (Jeremy) Theesfeld of Detroit Lakes, Paul (Mandy) Deuth of Pennock; grandchildren, Tyler, Colby, Dustin, Alex, Oliva, Emily, Madison, John, Lily; nephew, Douglas (Sherri) Erickson; great nephew, Matthew Erickson; other relatives and friends. Jack is preceded in death by his parents, John and Verna Deuth; maternal and paternal grandparents; several aunts and uncles; sister and brother-in-law, LaVonne and Jim Erickson; niece, Tammy St. Pierre; father and mother-in-law, Edwin and Evangeline Wawers.

Jack Deuth, age 78, of Montevideo passed away Monday, February 14, 2022, at St. Cloud Hospital. A Memorial Mass of Christian Burial will be held at St. Joseph Catholic Church in Montevideo on Thursday, February 24, 2022, at 10:30 AM with interment... View Obituary & Service Information

The family of Jack Deuth created this Life Tributes page to make it easy to share your memories.

Send flowers to the Deuth family.