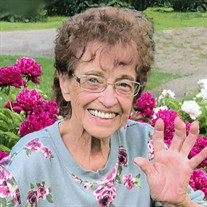 Irma Maybelle (Johnson) Schulte, left us to be in the loving arms of her Blessed Savior on Friday, November 15, 2019 at the age of 90 years. She is sadly missed by those she left behind. Irma was born on October 18, 1929 to George Bernhard and Mabel Elnora (Gautefald) Johnson on the Johnson family farm near Granite Falls, Minnesota. She attended school in Granite Falls until the 8th grade when family hardships required her presence at home. On June 14, 1953, Irma was united in marriage to Leland Robert Schulte and this union was blessed with eight children within the following 10 years. They raised their family near Granite Falls. In 1974 the couple built the home that Irma resided in until being admitted to the Granite Falls Care Center in May of 2019. Irma worked at the Granite Falls Manor from 1974 until retiring in 1994. Irma was not a stranger to hard work her entire life. Her heart was big and was filled with love for her family and her God. She was appreciated for her cooking and baking skills and the hospitality she showed to all family guests. Irma would gladly give up her seat at the table to anyone who dropped by. There were always ice cream pails of cookies and Cool Whip tubs of frozen fish placed next to the homemade frozen pies in the freezer. She was prepared and always felt the need to feed everyone. This was only one of the ways she showed her love. Irma radiated love and leaves us with a legacy of compassion, empathy and strength. She was a nurturer with a strong mother’s heart. Irma leaves behind her children, Gary (Jan) Schulte, Ron (Patrice) Schulte, Cindy (Dave) Harris, Richard (Kelly) Schulte, Cheryl (Randy) Boomgaarden, Doug Schulte, Diane (Bob) Schutten, Wayne Schulte; 19 grandchildren; 21 great grandchildren; sister-in-law, Ardie Johnson; as well as extended family and dear friends. Irma was preceded in death by her parents, George and Mabel Johnson; her husband of 56 years, Leland Schulte; granddaughter, Casey Schulte; brothers, Waldemar Johnson and Burdell Johnson. Blessed be the memory of our dear Mother, Grandmother and friend.

Irma Maybelle (Johnson) Schulte, left us to be in the loving arms of her Blessed Savior on Friday, November 15, 2019 at the age of 90 years. She is sadly missed by those she left behind. Irma was born on October 18, 1929 to George Bernhard... View Obituary & Service Information

The family of Irma Schulte created this Life Tributes page to make it easy to share your memories.

Irma Maybelle (Johnson) Schulte, left us to be in the loving...

Send flowers to the Schulte family.