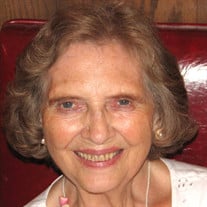 Inga Loken Hagen, 95, of Granite Falls, passed away Sunday, July 4th at the Granite Falls Care Center. Services will be held on August 31st at 11am at Granite Falls Lutheran Church. Visitation will be held one hour prior to services at the church. Due to coronavirus concerns face masks should be worn inside the church, and unfortunately lunch cannot be served after the service. Inga Hagen passed away in Granite Falls, MN, on July 4, 2021, at the age of 95. Inga was born on February 26, 1926, to Steffen and Olina Loken in Belview, Minnesota. Inga and her 10 siblings and parents lived and worked on two different farms in the Minnesota River Valley. In her later years she often talked about how much she enjoyed growing up in such a large, close-knit family. In their teens Inga and her sister Elenora once played guitar and sang on the WDGY radio station in Minneapolis. Inga married Willard Hagen on September 1, 1946, and they had two children, Jeffrey and Maurene. Inga had many jobs during her lifetime, including working as a waitress in the Sweet Shop restaurant and as a cashier at Neste’s grocery store in Granite Falls in the 1940s. Upon marrying she became a farmwife and mother. Later she worked in the Physical Therapy department of Methodist Hospital, sold cookware on weekends, and for many of her later years provided home health care in Minneapolis. When asked how she wanted to be remembered, Inga said, “My mind was on helping other people, all the way from before I was married, while I was on the farm, and after. I love taking care of other people, especially the elderly.” Inga was a tough, independent woman who survived a car accident that required multiple surgeries, stage 4 ovarian cancer, and colon cancer. She often said that prayer was how she survived all of these challenges, both her own prayers and those from others. Remarkably, Inga lived another 25 years after her cancer treatments. She had a strong personality but a heart of gold. While living in Willmar and Hopkins she provided lodging for numerous young women and helped them find jobs. She was also the family historian, with her laser-sharp memory for names, dates, and events. Recently she recited the names and ages of all the neighbor kids who took her to a Shirley Temple movie in Granite Falls in the 1930s. Family was very important to Inga, but all of her grandchildren and great-grandchildren live in WA, CA, and CO. She didn’t get to see them often, but when we all got together everyone had a wonderful time. Inga is survived by her son Jeffrey (Joyce) and daughter Maurene (Chris); grandchildren Lisa (Michael), Laura (Aadip), and Jason (Sarah); great-grandchildren Ruby, Coral, and Brayden; her sister Elenora; and numerous nieces and nephews. She was preceded in death by her parents, nine siblings, and her former husband. The family wishes to give special thanks to the staff of the Avera Granite Falls Care Center, who took such wonderful care of Inga during the past several years. A Memorial Service will be held at Granite Falls Lutheran Church on August 31, with visitation at 10:00 and the service at 11:00. Wing-Bain Funeral Home is handling the arrangements. Memories of Inga can be shared at wingbain.com

The family of Inga Loken Hagen created this Life Tributes page to make it easy to share your memories.

Send flowers to the Hagen family.