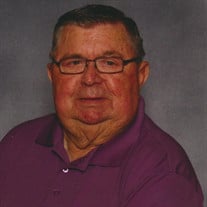 Howard (Howie) Allen Jurgenson, age 83, passed away peacefully in the Clarkfield Care Center on Saturday, October 26th, 2019. Howie was born October 14th, 1936 in Clarkfield, MN to Arden and Gladys (Westre) Jurgenson. He was a lifelong member of Clarkfield Lutheran Church and was baptized and confirmed there. He attended school in Clarkfield with the Class of 1955. In 1960, Howie joined the United States Army for 29 months, 13 months of which were spent in Korea. He was honorably discharged in 1962. He was employed for 37 years as a trouble shooter for the Clarkfield Telephone Company. On June 19th, 1965, he was united in marriage to Phyllis Ann Harms. To this union of 39 years, two children were born — Troy and Tammy. After the passing of his beloved wife, Phyllis, in 2004, Howie found great companionship with his special friend, Sally Christianson. Her and her family gained a special place in his heart with the love and support they provided. Howie will always be remembered for his quick wit, sense of humor, and endless story telling. A few of his hobbies included playing cards, spending time outdoors, and being surrounded by his friends and family. His greatest joy in life was his children and grandchildren. He is survived by his son, Troy and Jaci (Geurtz) of Rochester, MN; daughter Tammy and Stacy Mortenson of Montevideo, MN; four grandchildren, Jaden and Nolan Jurgenson, and Justin and Meghan Mortenson; special friend, Sally Christianson; brother, Richard Jurgenson; sister, Caron and John Aeikens; sister-in-laws, Janice Jurgenson and Darlene Jurgenson; brother-in-law, Luverne Johnson; and many extended family and friends. He is preceded in death by his parents; his wife; his brothers Roland, Arden Jr., and Larry; his sister, Jeanne Johnson; his sister-in-law, Liz Jurgenson; his mother-in-law, Donna Harms; and his father-in-law, John Harms.

The family of Howard Jurgenson created this Life Tributes page to make it easy to share your memories.

Send flowers to the Jurgenson family.