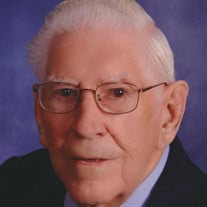 Howard Oscar Hultman was born February 10, 1922, the son of Oscar and Emma Hultman in Delhi, Minnesota. He was baptized in the Lutheran faith and confirmed on July 22, 1934. He attended school in Belview and graduated from high school in 1940. Following graduation, he continued to work on the family farm. He was united in marriage to Virginia Kittelson on September 19, 1943, in Sacred Heart. They moved to Granite Falls in the 1950’s where he worked for the LP Gas Company. Later he was employed at Granite Furniture Store where he sold and upholstered furniture. Howie enjoyed bowling and spent many early mornings out for coffee with “the guys”. He had an amazing talent for woodworking and made many priceless pieces for his family. He loved watching any and all sports, but the MN Twins held a special place in his heart. Howie always took great pride in his yard and garden. Howie cherished time spent with his family, especially his granddaughters and he always looked forward to spending summer days at the lake with his daughter. Howie passed away peacefully on Thursday, April 26, 2018, at the Granite Falls Health Care Center. He was 96 years of age. He is survived by his daughter Margot (Chuck) Shellenbarger of Montevideo, granddaughters: Kimber (Kevin) Bratsch of Manassas, Virginia, Krystal (Brett) Koppes of Sarasota, Florida, and Tifany (Michael) Andresen of Montevideo, great grandson Ethan Andresen and nieces, nephews and extended family and friends. He was preceded in death by his parents, wife, sisters: Bernadine Boss, Josephine Mohl and Margaret Engel, one brother Bill Johnson and his special friend, Elaine Gullickson. Howie was loved by many and will be missed but never forgotten. Funeral services will be held on Tuesday, May 1st at 1:30 pm at the Granite Falls Lutheran Church. Burial will be held at Granite Falls Lutheran Hillcrest Cemetery. Visitation will be held one hour prior to services at the church on Tuesday. Howie is the father of Margo Shellenbarger.

Howard Oscar Hultman was born February 10, 1922, the son of Oscar and Emma Hultman in Delhi, Minnesota. He was baptized in the Lutheran faith and confirmed on July 22, 1934. He attended school in Belview and graduated from high school in 1940.... View Obituary & Service Information

The family of Howard Hultman created this Life Tributes page to make it easy to share your memories.

Send flowers to the Hultman family.