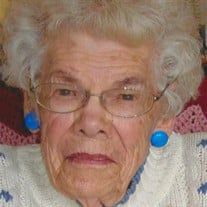 Hazel Messerli was born Aug. 28, 1917 in Wang Township, Renville County to Christopher (CC) Hovda & Clarabelle (Johnson) Hovda. She grew up on the farm and attended rural School District 141, Maynard High School & St Cloud State Teachers College. On Oct. 3, 1937 she married Virgil (Bud) Messerli.  They lived in Maynard where she worked as a waitress in local cafes, for Hjalmer Weber's Drug Store & 17 years for the Olson Produce.  After the death of her father in 1958, she & her husband moved to her parents farm where she helped her husband with farming duties.  She was a gardener & loved flowers which she shared with friends from her "Friendship Garden".  She was a member of Maynard Lutheran Church where she taught Sunday School, Bible School & was a member of the Ladies Aid & WELCA.  She served as President & Past President of the Women's American Legion Auxiliary & the P.T.A.  She was a member of the Maynard Sr. Citizens Club, the Green Feather Whist Club & WELCA quilters. She is survived by her son Douglas (Jane) Messerli of Coon Rapids, Son-in-Law Robert Haubrick (Gunn Sandik) of Ramsey, 5 grandchildren, Kristi (Mike) Nelson of Elk River, Todd (Mary) Haubrick of Anoka, Don Messerli of Blaine, Tracy (Tim) Sorensen of Duluth, & Chris Messerli of Andover, 9 great grandchildren - Ashley (Darren) Norberg, Jamie & Alexandra Messerli, Mike & Matt Sorensen, Hanna & Joseph Haubrick, Colin & Cate Messerli, 2 great-great grandchildren Isabelle & Elliana Castillo. She was preceded in death by her brother Chester, her parents, her husband Bud in 2003 & her daughter Barbara in 2006. She became a resident of Granite Ridge Place in Granite Falls, MN in Sept. 2006. She went to the Granite Hospital & Manor in July 2014 & resided at the Granite Falls Health Care Center until her passing Blessed be her memory. All honorariums prefered to the Maynard Lutheran Church.

The family of Hazel Messerli created this Life Tributes page to make it easy to share your memories.

Send flowers to the Messerli family.