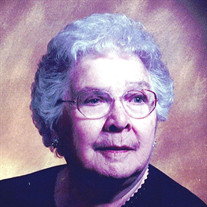 Hazel Dorthea Harguth was born October 6, 1920, in Crate Township, rural Clara City, Minnesota, to John and Christine (Johnson) Uttermark. She was baptized on July 24, 1921, and later confirmed in her faith in 1934, both at the Immanuel Lutheran... View Obituary & Service Information

The family of Hazel Harguth created this Life Tributes page to make it easy to share your memories.

Send flowers to the Harguth family.