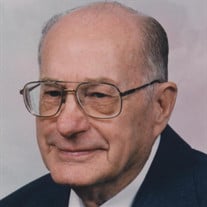 Harris Williams Halstead was born November 15, 1915 to his parents Jesse and Rose (Williams) Halstead at their farm home near Webb, IA. He was baptized in the Brookings South Dakota Baptist Church. Harris graduated from Brookings South Dakota High School and then attended a vocational school in Brookings to work with dairy products. He attended Wessington Springs Junior College. He graduated from Dakota Wesleyan University at Mitchell, SD, and also from Asbury Theological Seminary in Wilmore, KY. Harris was ordained as a Deacon and Elder and became a member in full connection in South Dakota Annual Conference. Harris’ first appointment was to the “Little Brown Church on the Prairie” (near Pierre, SD) in 1939. He served several United Methodist Churches in South Dakota. He was pastor of the United Methodist Church in Clarkfield and served as a substitute in many other area churches. Harris was a social worker at the Yellow Medicine County Welfare Department prior to becoming Administrator of The United Methodist Brookside Manor Retirement Home in Montevideo for 13 ½ years. He retired in 1979. Harris moved to Granite Falls where he enjoyed working on the yard and having flower and vegetable gardens in his retirement years. He enjoyed traveling and spending time with his family. His final years were spent in Luther Haven Nursing Home in Montevideo. Harris was united in marriage to Martena Bowena Prevo on June 7, 1940 in White, SD. Martena passed away on February 16, 1992. They were married for 52 years. Harris then married Lucille Nelson on November 27, 1992 and was married to her for 20 years. Harris is survived by his son, Marlitt (Diane) Halstead of Powell, WY, daughter, Rosalene (Danny) Mooney of Granite Falls and son, Duane (Janet) Halstead of Montevideo. He is also survived by 7 grandchildren, 17 great grandchildren, 3 great step-grandchildren and 1 great-great-grandson. Preceding him in death were his parents, his first wife, Martena, his second wife, Lucille, his great granddaughter, Cynthia Halstead, his sister, Beulah and brothers, Russell, Orlo and Leonard. In lieu of flowers, memorials are respectfully requested. Memorials will be given to Asbury Seminary and the Montevideo United Methodist Church.

The family of Rev Harris Halstead created this Life Tributes page to make it easy to share your memories.

Harris Williams Halstead was born November 15, 1915 to his parents...

Send flowers to the Halstead family.