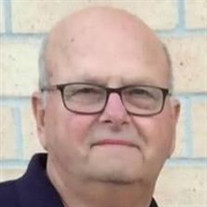 Gordon Hewitt, 79, of Granite Falls, passed away on Sunday, February 28th at the Carris Health Care Center in Willmar. Funeral services will be held on Saturday, March 6th at 2 pm at St. Paul Lutheran Church in Granite Falls. Visitation will be held one hour prior to services at the church on Saturday. Gordon Danny Hewitt was born on March 3rd, 1941 in Pipestone MN to Neal and Eleanor (Mueller) Hewitt. He was baptized April 1941, confirmed July 1954 in Elkton SD. He attended K-8th grade at Verdi Public School, then attended 9-12th grade at Hanley Falls High School and graduated in 1959. He was united in marriage to Loretta Kise on August 17, 1963 at Trinity Lutheran Church in Boyd MN. They were blessed with three children, Steve, Stacy and Marc. He was a lifelong farmer and raised registered Black Angus cattle with his brother Rick. Gordy was a kind-hearted, hard-working person with a great sense of humor. He enjoyed spending time with family, taking in the grandkids various activities, birdwatching, playing cards and spending winters in Lake Havasu City, Arizona after retiring. He enjoyed playing, watching and talking sports whether it involved his kids or grandkids and he also enjoyed following the Twins, Vikings, Timberwolves and Gophers. Gordy was involved in various boards during his farming years, including MN Falls Elevator Board, MN Falls Township Board, Airport Commission, and was a member of the American Angus Association. Gordy received the Granite Falls Chamber of Commerce Outstanding Farmer award in 1993 and also the WCCO Radio & Popp Telcom Farm Family Award in 2000. He held numerous church office positions while a member of Bethany Evangelical Lutheran Church in Granite Falls before it closed. He then became a member of St. Paul Lutheran Church. He was an amazing husband, father, grandfather and friend and will be truly missed by those that knew him. Gordy passed away on Sunday, February 28, 2021, at the Carris Care Center, in Willmar. He was 3 days shy of his 80th birthday. Gordy is survived by his wife Loretta, children: Steve Hewitt of North Mankato, Stacy (Paul) Ratz of Fergus Falls and Marc (Lisa) Hewitt of Brooklyn Park; grandchildren: Jenna Hewitt, Daniel Hewitt, Emily Ratz, Ryan Ratz, Tori Ratz, Jack Ratz, Brad Hewitt and Drew Hewitt; brother Rick (Colleen) Hewitt of Granite Falls, sister-in-law Marge Hewitt of Malone, Wisconsin and several nieces, nephews and cousins. He was preceded in death by his parents, brother Gary Hewitt and nephew Craig Hewitt.

The family of Gordon Hewitt created this Life Tributes page to make it easy to share your memories.

Gordon Hewitt, 79, of Granite Falls, passed away on Sunday, February...

Send flowers to the Hewitt family.