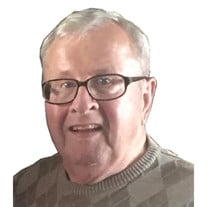 Gerald William (Jerry) Gustafson was born on November 24, 1943, in St. Paul, MN to Oscar and Alice (Kersten) Gustafson. Jerry was baptized and confirmed in the Lutheran faith. Jerry graduated from Mounds View High School and the University of Minnesota with a degree in sociology. Jerry worked for several years as a social worker at Yellow Medicine County Family Service Center and later as a Program Director for people with special needs with Lutheran Social Services in Willmar, MN. On August 20, 1977 Jerry was united in marriage to Barb Stratmoen (Johnson) at the United Church of Christ in Granite Falls. They were blessed to have a blended family, where all care deeply for one another. Jerry was a member and Secretary-Treasurer of the Granite Falls Rescue Squad for 26 years. Jerry enjoyed playing golf and softball, fishing, pheasant hunting and was an avid “buck” player. Jerry’s greatest joy was spending time with his children and grandchildren. Jerry was a devoted husband and loving father and grandfather. He will be greatly missed by his family and friends. In the early morning hours of Sunday, December 23, 2018, in the loving presence of his family, Jerry was called from this world at Ridgeview Medical Center in Waconia, MN. Jerry is survived by his wife, Barb, of Chanhassen, MN; his children – Jeffrey (Carol) Gustafson and their children, Joseph and Sarah; Joel (Amy) Gustafson and their children, Eric and Evan; Matthew (Charlene) Johnson and their children, Vaughan and Layne; Nicole (Mike) Brandriet and their children, Sam, Ben, Danielle, Sidney, Michael and Ava; his brother LeRoy (Kathy) Stolp; sisters-in-law, Ann (Duaine) Amundson and Liz (Doug) Schuler. Jerry was preceded in death by his parents, Oscar and Alice, step-father, Fred Stolp, mother and father-in-law, Lloyd and Hazel Stratmoen, and beloved grandson, Vance Matthew. Jerry Gustafson, age 75, of Granite Falls, died early Sunday morning at Ridgeview Medical Center in Waconia. Services will be held on Friday December 28th at 11 am at the United Church of Christ. Visitation will be held one hour prior to services on Friday. In lieu of flowers memorials to a charity of your choice.

The family of Gerald "Jerry" Gustafson created this Life Tributes page to make it easy to share your memories.

Send flowers to the Gustafson family.