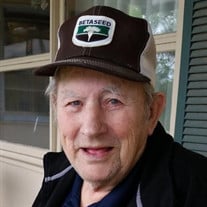 A private family graveside service will be held. George Randt was born on December 17, 1934 in Stoneham township, the son of Eilert and Anne (Fisser) Randt. He was baptized and confirmed at the Bethany Reformed Church in Clara City. George and his siblings grew up farming in central Minnesota. He attended school at Sunny Side in Svea and graduated in the eighth grade. George married Alice (Christenson) in 1957. To this union six children were born. They made their home in Gluek and Maynard where George worked for Cargill Inc., Thorstad Construction Company, and later was self employed in Grain Elevator Contruction and Repair. He was a member of Maynard Lutheran Church. George was an outdoorsman, he enjoyed vegetable gardening, deer hunting, taking his boat to Villard to fish, and constructed yard decorations. He loved driving his El Camino, even in a blizzard when he shouldn’t be out on the road. George was always ready for playing a game of Buck with the boys and shaking dice with the girls. The grandkids caught on quickly to Grandpa’s sneaky ways of winning. Grandpa George was famous for his bear hugs, and trying to take the grandkids home with him for a “couple weeks”. On Sunday, March 29, 2020, George passed away peacefully surrounded by family at Rosewood Memory Care Center in Montevideo at the age of 85. George is survived by Alice; six children: Allan (Joan) Randt of Bemidji, MN; Scott (Geri) Randt of Randolph, WI; Pam Randt of Murdock, MN; Curt (Jacci) Randt of Appleton, WI; Dee (Lance) Knoshal of Montevideo, MN; Lyn (Scott) Olson of Spicer, MN; and grandchildren: Jamie (Rob) Billings, Nicole (Doug) Varenas, Cody (Dana) Randt, Tina Spetzman, Chad (Kelly) Randt, Keegan Randt, Jacob Randt, Logan (Nikki) Knoshal, Landen Knoshal, Anika Olson, and Ashlyn Olson, and eleven great-grandchildren; three brothers, James (Virginia) Randt, Dale (Margaret) Randt, Lee (Elaine) Randt; and sister in law, Joyce Randt. He was preceded in death by his parents, eight brothers and one sister.

A private family graveside service will be held. George Randt was born on December 17, 1934 in Stoneham township, the son of Eilert and Anne (Fisser) Randt. He was baptized and confirmed at the Bethany Reformed Church in Clara City. George... View Obituary & Service Information

The family of George Randt created this Life Tributes page to make it easy to share your memories.

A private family graveside service will be held.

Send flowers to the Randt family.