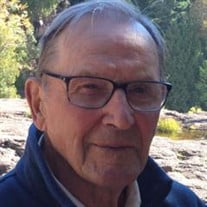 George Kluver, 98, of Clara City, passed away on Tuesday, December 1st at the Clara City Care Center. A private family service will be held on Saturday December 5th. Memorials preferred to Bethany Reformed Church, Clara City Lions Club, MACCRAY 2180 Foundation or the Clara City Community Foundation. George R. Kluver was born August 8, 1922, the son of Remmer & Hattie (Kray) Kluver in Rheiderland Township, Chippewa County. He was baptized at Bethany Reformed Church. He attended school in District 55. George worked for area farmers following his schooling. He also worked for the VSC and Swift Packing. George served his country in the United States Army during World War II. He was honorably discharged in December of 1946. He was united in marriage with Gertrude Peters on November 18, 1949, at Bethany Reformed Church in Clara City. They enjoyed 71 wonderful years together. They farmed north of Clara City for many years. Following his retirement he worked for Milton Wubben and Cliff Hagemeyer. George was a lifelong member of Bethany Reformed Church where he served as an Elder, Deacon, Sunday school teacher and went on many mission trips. He was also active in the community with the Clara City Lions, Clara City American Legion, 4-H leader and was a master gardener. He served on the Clara City School Board, Friesen Historical Society, and was the township assessor for Chippewa County. He enjoyed gardening, woodworking, socializing and kept himself busy with productive work. He also sewed quilt tops and was very proud to give them to fellow veterans. George sewed burp clothes for the Benson School Day Care and was one of their favorite sewist. His greatest joy was his family and loved spending time with them. George passed away on Tuesday, December 1, 2020, at the Clara City Care Center. He was 98 years of age. He is survived by his wife Gert, daughters: Bonnie Kluver of Kerkhoven and Jackie (Loren) Grothe of Spicer; grandchildren: Daniel (Marie) Grothe of Paynesville and their children James, Helen and Luther, and Rachel (Geoff) Gilbertson of Spicer and their children Shep and Esme; sister-in-law Esther Kluver of Clara City; brothers-in-law: Kenneth (Karen) Damhof of Willmar, Lloyd Santjer of Sacred Heart and James Peters of Raymond; cousin Jim Kluver of Clara City, goddaughter Aimee (David) Bus of Victoria and many nieces, nephews and extended family and friends. He was preceded in death by his parents, brothers: Wessel and Alvin and sisters: Anna Damhof and Esther Santjer.

The family of George Kluver created this Life Tributes page to make it easy to share your memories.

George Kluver, 98, of Clara City, passed away on Tuesday, December...

Send flowers to the Kluver family.