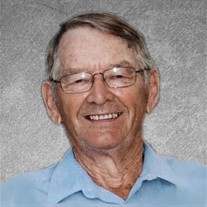 Francis Carl Menking, 88, of Maynard, Minnesota passed away on Wednesday, January 2, 2019 at the Clara City Care Center where he had lived for more than two years while enduring the effects of PSP (Progressive Supranuclear Palsy). Fran was born May 26, 1930, in Montevideo, Minnesota to Carl and Trena (Buhr) Menking. He grew up on a farm in Chippewa County, graduating from Maynard High School and joining the Army in 1952. Before being stationed in Germany for 18 months, he married the love of his life, Ardis Evjen and they were married for 65 years. Following his discharge from the Army, he joined Ardis in Fergus Falls where she was teaching and briefly worked in a hardware store before returning home to the farm he loved, raising crops and livestock along with some trucking and custom corn shelling before retiring at 62 and entrusting his farm to his son-in-law and later his grandson, Josh. He enjoyed helping out by driving sugar beet truck until he was nearly 80 years old. Education was very important to Fran including 20 years on the Maynard School board, serving several years as chairman. He was also a very active and proud member of the Maynard Legion and a lifelong and devote member the Immanuel Lutheran Church. Fran loved sports, especially fishing, swimming, snow skiing and golf. He got much pleasure from following the sporting events of his children and grandchildren. Fran was an avid gardener always sharing with neighbors and friends. After retirement, he & Ardis enjoyed many travels with friends. They traveled in their motor home visiting many places in North America from Alaska to Mexico before purchasing a winter home in Mission, Texas where they met many new friends they loved to connect with each winter. Fran is survived by his daughter, Judy (Terry) Noble of Maynard; son, Daniel (Sue) Menking of Webster, SD; brother, Lloyd (Corrine) Menking; sister, Gerry (Ron) Quast; in-laws, Joan & Bruce Skeie; his grandchildren, Josh (Kris) Noble; Jamie (Christian) Price; Nathan (Miriah) Noble; Kristi (Kelsey) Wiltzen; Becca Menking; Ross Menking; great-grandchildren, Olivia Noble, Ava Noble, Colton Noble, Lainey Noble, Landon Price, Eve Noble, Cora Noble, Celia Wiltzen and several beloved cousins, nieces and nephews. He was preceded in death by his wife, Ardis; his parents Carl & Trena Menking; in-laws, John & Olga Evjen, and brother-in-law, Norris Evjen A special thank you to the staff at the Clara City Care Center who cared for him and gave us support. We so appreciate the kindness and care you gave to Dad these past 26 months.

Francis Carl Menking, 88, of Maynard, Minnesota passed away on Wednesday, January 2, 2019 at the Clara City Care Center where he had lived for more than two years while enduring the effects of PSP (Progressive Supranuclear Palsy). Fran was born... View Obituary & Service Information

The family of Francis Menking created this Life Tributes page to make it easy to share your memories.

Francis Carl Menking, 88, of Maynard, Minnesota passed away on...

Send flowers to the Menking family.