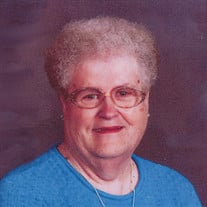 Emily Ann (Bulthuis) Poppen, age 85, passed away Thursday, October 3, 2019, at the Clara City Care Center in Clara City, Minnesota. Emily was born September 27, 1934, the daughter of Elko and Johanna (Ritsema) Bulthuis, in Kandiyohi County. She attended grade school at District 90 and went on to attend high school in Willmar, graduating in 1952. At the age of 16, Emily made the decision to join the Roseland Reformed Church. Emily was united in marriage to George Poppen on June 6, 1957, at Roseland Reformed Church in Roseland, Minnesota. They made their home on a farm north of Clara City for many years. The couple moved to Clara City in the fall of 1993. They shared over 62 years of marriage together. Emily worked at Thrifty White Drug in Willmar following her graduation and later went to work at Jennie-O in Willmar and also at Trena’s Café for seven years. She was a member of the Bethany Reformed Church and served with the Bethany Esther Circle and taught Sunday School for over 30 years for the 3 and 4 year olds, but her favorite students were her two grandchildren. Emily was a member of the Garden Club and the Pairs and Spares. Emily could talk with anyone and had a way of putting others at ease. She loved her crossword puzzles and finding word games. Emily enjoyed caring for her grandchildren, who she dearly loved. Emily is survived by her husband, George Poppen of Clara City; son, Brad (Darla) Poppen of Clara City; grandchildren, Katie Poppen, Kyle Poppen; step grandchildren, Kelli (Dan) Rath, Danelle (Jr.) Aviles; great grandchildren, Mason Ashburn, Julien Aviles, Esme Aviles; brother, Bernard (Gert) Bulthuis; sister, Jennie Mae Wubben; as well as extended family and friends. Emily was preceded in death by her parents, Elko and Johanna Bulthuis; infant sister; brothers, John (Nell) Bulthuis, Claude (Anne) Bulthuis, Henry (Leona) Bulthuis; brother-in-law, Andrew Wubben.

The family of Emily Poppen created this Life Tributes page to make it easy to share your memories.

Send flowers to the Poppen family.