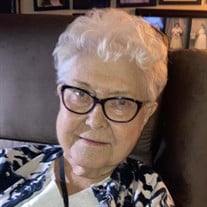 Ellayne Tolora Velde-Conyers passed away peacefully at Brookdale Assisted Living Edina, MN on December 18, 2021. She was born on January 16, 1935 on the family farm near Hanley Falls, MN. She attended Augsburg College then married LeRoy Conyers on January 21, 1956. Besides being a wife and busy mother, Ellayne worked as a para-professional at Marshall’s first Middle School for 10 years, then for another 10 years with the Minnesota Extension Services. For part of that time she was transferred to the U of M Campus 4-H office where she was assistant to the director and supervised the Civil Service staff. Upon returning to Marshall, Ellayne became the executive director of the Lyon County History Museum for the next 21 years. During that time she also served on the Marshall Area YMCA Founding Board of Directors, served two terms as Marshall Police Commissioner, conducted after-school homework sessions for new-immigrant Middle School Students, co-chaired the Marshall 125th Five-day Celebration, served as Area Representative of the Minnesota Sesquicentennial, and supported the creation of the Arts and Entertainment District in Marshall which includes the downtown wall murals and the statue of Mrs. Whitney who named the town. She served as a member of the Marshall City Council where she sat on the Marshall Community Services Advisory Board, Area Senior Commission, the City Legislative & Ordinance Committee, the Public Improvement/Transportation Committee, and served as the City Council representative to the “Act on Alzheimer’s” Task Force. She wrote a weekly article for the Marshall Independent Newspaper for 21 years, later publishing all in five volumes of Our Rural Roots, and hosted the “Marshall News and Views Show”, a weekly cable access television program. In retirement she served on the Resident Council at Brookdale Senior Living. Ellayne was pre-deceased by her husband, parents, two brothers and sisters-in-law, one son-in-law, one nephew, one nephew-in-law and one great-nephew. She is survived by her daughters Cosette, Suzanne (Wayne), Stefani (Steve) and Rebecca (David), three granddaughters, four grandsons, four grandsons-in-law, one great-granddaughter with another due in the Spring, as well as numerous nieces, nephews, great-nieces and nephews, great-great nieces and other relatives. Interment at Yellow Medicine East Cemetery. Arrangements by Wing-Bain Funeral Services, Granite Falls, MN. Masks will be required for the visitation and service. The family requests donations be made to The Advocates for Human Rights https://www.theadvocatesforhumanrights.org.

The funeral service is canceled due to unforeseen circumstances. A Celebration of Life will be held later this year.

Send flowers to the Velde-Conyers family.