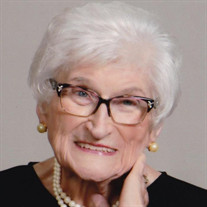 Elaine Moe, 94, of Granite Falls, passed away Tuesday January 5th at the Guardian Angles Care Center in Elk River. Services will be held in the Spring of 2021. Memorials prefered to Hillcrest Cemetery which may be sent to Granite Falls Lutheran Church 350 9th Avenue Granite Falls MN 56241 Elaine L. Moe June 13, 1926 – January 5, 2021 Beloved mother and grandmother, cherished sister, aunt, and friend to many in Granite Falls, passed away January 5, 2021 of natural causes at the age of 94. Elaine was devoted to her family and friends and was a source of strength, support, guidance and unconditional love to all whose lives she touched. A beautiful heart, she always lent a helping hand, giving so much to her church and community. Born June 13,1926 in Montevideo, MN, she was the daughter of Emil C. and Hulda M. Formo (Nelson). She is survived by her two sisters Phyllis Babalian of Kansas City MO and Vionne Johnson of Chelsea, MI, her daughter Gayle (Hunter) her husband William of Albertville, MN, son Gregory and wife Sheryl Martin-Moe of Oakland, CA, and granddaughters Elaina of Washington D.C. and Nina (Walker) and husband Bryan of Saratoga Springs, NY. Her parents, husband Paul Moe, her brother Harlan and his wife Margorie, and her brothers-in-law Peter Babalian and Kenneth Johnson proceeded her in death. Her education began in Asbury, MN in a one room schoolhouse. She graduated from Granite Falls High School in 1944 before obtaining a teaching degree at what was then St. Cloud State Teachers College. She taught in Clara City and Madison, MN before marrying Paul at the Baptist Church in Maynard, MN in 1951 The couple and daughter Gayle moved to Granite Falls after Paul completed military service in Alabama. Elaine led an extraordinary ordinary life as the wife of the county sheriff and mother to two children living in a house connected to the county jail where she handled the visitors, phone, radio, and teletype in the sheriff’s office at a time when there was only the sheriff and one deputy to patrol the county. She also prepared meals for the inmates and continued to work as an occasional substitute teacher in the Granite Falls Elementary School. Elaine’s devotion to service included serving as officer on several nonprofit boards including the Granite Falls Lutheran Church, WELCA, Municipal Hospital auxiliary, Dinners at Your Door, Riverview, and Camp Fire Girls. She actively participated in the American Legion auxiliary, Municipal Hospital Hospice and in Drama and Study clubs. Elaine was an avid bridge player where, as member of many clubs over the years, she played as many as three times a week nearly to the end of her life. Her greatest joys were her family, friends, cooking, baking and entertaining all in her home of 43 years on Terrace Drive.

Elaine Moe, 94, of Granite Falls, passed away Tuesday January 5th at the Guardian Angles Care Center in Elk River. Services will be held in the Spring of 2021. Memorials prefered to Hillcrest Cemetery which may be sent to Granite Falls Lutheran... View Obituary & Service Information

The family of Elaine Moe created this Life Tributes page to make it easy to share your memories.

Send flowers to the Moe family.