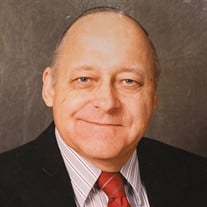 Dr. Kenneth Robert Carter was born on December 15, 1942, in Chicago, Illinois, the son of Floyd and Lucille (Merkens) Carter. He was baptized as an infant at the Pleasant View Lutheran Church and later confirmed at the Methodist Church in Ada, Minnesota. Growing up on a farm in rural Norman county near Ada, Ken attended school and graduated in 1960 from the Ada Public High School. He continued his education at the University of Minnesota with intentions to become a veterinarian, but his heart fell to caring for people. He earned his medical degree at the University of Minnesota Medical School, was a member of the Phi Chi Fraternity, graduating in 1968. He then completed a rotating internship at St Mary’s Hospital in Duluth, MN on July 1, 1969. On June 11, 1967, Dr. Ken was united in marriage to Lorelei “Lori” Folkerts at University Methodist Church in Minneapolis. They were blessed with three sons, Robert, Richard and Ted. Following his internship, he began practicing medicine in Clinton, Minnesota. In 1970, Dr. Ken joined the physicians at Granite Falls Medical Center and for 50 years he quietly served the community. He was on staff at the Granite Falls Hospital, was a friend of the Upper Sioux Community and he was instrumental to the founding of Project Turnabout. Dr. Ken was a member of the Minnesota Medical Association, the Academy of Family Physicians, Minnesota Academy of Family Physicians, American Medical Association, and the area Camp Release Medical Society. He was board certified in Geriatric Medicine. Dr. Ken was the county coroner for decades, a Director of Home Health, Director of Hospice for the Granite Falls Hospital and an educator for the Rural Physicians Associate Program (RPAP) through the University of Minnesota Medical School. Dr. Ken loved to teach, even when he was the one receiving the care. His eyes sparkled when he could share knowledge with others. Dr. Ken had many hobbies including, photography, woodworking, hunting and fishing. He loved living in the country where he could enjoy his horses, farming, “tractoring” and vegetable gardening. His grandchildren filled his life with joy, and he supported each of their special interests and education. Grandpa Ken adored telling and read stories with his grandkids. He proudly shared pictures and activities involving his grandkids any time he could, occasionally throwing in a story about his dog, Skippy. On Thursday, January 23, 2020, Dr. Ken passed away peacefully surrounded by family at CCM Health in Montevideo at the age of 77 years. Surviving family include his life (wife), Lorelei, “Lori” Carter of Granite Falls; sons, Robert (Lisa) Carter, Richard (Susie) Carter of Flower Mound, TX, Ted (Kimber) Carter of Apple Valley; grandchildren, Emma, Joelle and Aryn Carter, Alexander, Ledger, Evelyn and Milana Carter, Lucille, Bella and Elizabeth Carter; brother, Dr. Darrell (Hazel) Carter; brother-in-law, Dan Jensen of Janesville; nephews, Michael (Melissa) Jensen of Hastings, Matthew (Amy) Jensen of Sioux Falls, SD; nieces, Dawn (Steve) Leigh of Janesville, Sheila (Jeff) VanOverbeke of Granite Falls; as well as many other relatives and friends. Dr. Ken was preceded in death by his parents, Floyd and Lucille Carter; sister-in-law, Marlene Jensen. The family respectfully requests memorials be directed to Granite Falls Lutheran Church, Rice Hospice or Pioneer Public Television. Arrangements are with the Wing-Bain Funeral Home of Granite Falls. For online guestbook, please visit www.wingbain.com

Dr. Kenneth Robert Carter was born on December 15, 1942, in Chicago, Illinois, the son of Floyd and Lucille (Merkens) Carter. He was baptized as an infant at the Pleasant View Lutheran Church and later confirmed at the Methodist Church in Ada,... View Obituary & Service Information

The family of Dr. Ken Carter created this Life Tributes page to make it easy to share your memories.

Send flowers to the Carter family.