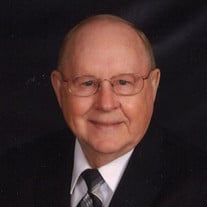 Doug McCoss, age 81, of Granite Falls, Minnesota passed away on Tuesday, November 9, 2021 at Essentia Health in Fargo, North Dakota. Funeral services will be held at Granite Falls Lutheran Church in Granite Falls on Tuesday, November 16, 2021 at 11:00 AM, interment will follow in the church cemetery. Visitation will be one hour prior to the service at the church. Douglas Oliver McCoss was born on May 16, 1940, in Minneapolis, Minnesota. He was the son of Nelson and Louise (Olsen) McCoss. Doug graduated from Madison High School in 1958 and married his high school sweetheart on June 9, 1958. After high school, he graduated from Moorhead State University Cum Laude with degrees in biology, chemistry and education on June 7, 1962. Doug and Karen were blessed with six children, Deborah, Jeff, Kari, Jill, David and Dan. He began teaching biology and chemistry at Pipestone High School until 1972, when the family moved to Granite Falls. Doug was the Principal of Granite Falls High School (GFHS) until 1999. After retiring from GFHS, he took a co-director job at the Minnesota Valley Area Learning Center in Montevideo for 11 years. Other part time jobs he had were being a night policeman, taught classes at Southwest Minnesota State University (SMSU), taught driver’s education and was an assistant basketball coach for many years. Doug’s passion was learning. When his children were younger, the family would take the summers and move to a university in the United States where Doug would further his education and the family would go along and experience the local culture. Through the years, he received not only his master’s degree but also his doctorate. Doug’s zest for life was contagious. As a Principal, his morning greeting to the students always ended with “Make it a great day or not, the choice is yours.” Doug was a member at Granite Falls Lutheran Church and served as a deacon there. He loved sports and attended all school functions of his dear grandchildren, whether it was sports, choir, or band. Doug is survived by his wife, Karen McCoss of Granite Falls; children, Deborah (Dave) Lund of Duluth, Georgia, Jeff McCoss of Anna, TX; Kari (Cary) Knudson of Battle Lake, Jill McCoss of Port St. Lucie, FL, David McCoss of Marshall, Dan (Jennifer Lutgen) McCoss of Plymouth; grandchildren, Justin (Jennifer) Lund, Josh Lund, Kelsey (Adam) Evavold, Kayla (Nick) Fay, Sadie (Cole) Arvidson, Samantha Knudson, Cole Knudson, Ryan Schorn, Cody (Kayla Szczepanski) Schorn, Megan (Jerrad) Ryer, Garrett (Stephanie Wanda) McCoss, Josie McCoss, Ainsley McCoss, Kenna McCoss, Bailey McCoss; nine great grandchildren, Oscar, Rory, Henrik, Violett, Maddie, Tanner, Oden, Sutton, Finnley; as well as nieces, nephews, other relatives and friends. Doug is preceded in death by parents, Nelson and Louise McCoss; grandson, Clinton McCoss; daughter-in-law, Terrie McCoss.

The family of Doug McCoss created this Life Tributes page to make it easy to share your memories.

Send flowers to the McCoss family.