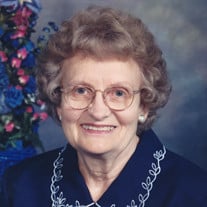 Dorothy Almuth Boike was born on March 5, 1928, in Stoneham Township, in rural Maynard, Minnesota, the daughter of George and Josie (Dieken) Priebe. She was baptized and confirmed in her faith at Immanuel Lutheran Church. Dorothy attended and graduated from the Maynard High School in 1945. On September 3, 1948, Dorothy was united in marriage to George Boike at Immanuel Lutheran Church in Clara City. The couple made their home on a farm in Rheiderland Township and they were blessed with four sons: Wayne, Merlin, Lyle and Dean. In 1966, they moved to Clara City. Dorothy worked at Artex and later at the Clara City Care Center for 28 years as a dietary aide. Dorothy was a faithful member of Immanuel Lutheran Church where she was active in the Women’s group, Bible study, and visiting members in their homes. She would also assist with the delivery of Meals on Wheels in Clara City. Dorothy enjoyed going on bus tours with friends and taking vacations with her children and grandchildren. She was an excellent cook and if you stopped in for coffee, it was always served with her fabulous banana bread. Dorothy was a wonderful mother, grandma, and great grandma. She spent countless hours with the grandchildren at the City Park when they came to visit her and as the grandchildren grew, she attended many concerts and sporting events. On Wednesday, February 20, 2019, Dorothy passed away at the Clara City Care Center. She reached the age of 90 years, 11 months and 13 days. Blessed be her memory. Dorothy is survived by her sons, Wayne (Linda) Boike of Shoreview, Lyle (Kristin) Boike of Montevideo, Dean (Kim) Boike of Willmar; 8 grandchildren: Jennifer (Kevin) Josephson of Eagan, Julie (Craig) Colee of St. Augustine, FL, Jackie (Josh) Ahlstrom of Inver Grove Heights, David (Brittin) Boike of Alexandria, Kevin Boike (Liz Billberg) of Alexandria, Amanda Boike (Peter Bockhaus) of Lafayette, CO, Ryan (Kayla) Boike of West St. Paul, Carrie Boike of Willmar; 10 great grandchildren, Cooper and Erica Josephson; Beckett, Brogan, and Bevin Colee; Eliana, Abigail, and Michael Ahlstrom; Adilynn and Ellery Boike; sister-in-law, Frances Priebe of Clara City; as well as many nieces, nephews, other relatives and friends. Dorothy is preceded in death by her parents, George and Josie Priebe; husband, George; son, Merlin; great granddaughter, Lily Ahlstrom; brother, Lloyd Priebe.

Dorothy Almuth Boike was born on March 5, 1928, in Stoneham Township, in rural Maynard, Minnesota, the daughter of George and Josie (Dieken) Priebe. She was baptized and confirmed in her faith at Immanuel Lutheran Church. Dorothy attended... View Obituary & Service Information

The family of Dorothy Boike created this Life Tributes page to make it easy to share your memories.

Send flowers to the Boike family.