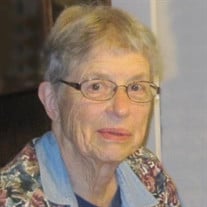 Doris Halverson, age 87, of St. Peter and formerly Clara City, Minnesota passed away Saturday, May 1, 2021 at the Prairie Hill Assisted Living in St. Peter. Doris Gertrude Halverson was born on October 10, 1933 in Clara City, Minnesota, the daughter of Siebolt and Freida (Hilbrands) Kleene. She was the oldest of three children. Doris attended the Clara City public schools and graduated with the High School Class of 1951. She was named class Salutatorian. She entered the Fairview Hospital School of Nursing and graduated with an R.N. degree in 1954. She then worked as a nurse at Fairview Hospital for a time, and continued in nursing until retirement. She was united in marriage to David Jansen in February 1958at Immanuel Lutheran Church in Clara City. To this union, four children were born, twins, Larry and Loren, and Sharon and Leo Dean. The family subsequently lived in Rock Island, Illinois, Stanton, Iowa, Port Wing, Wisconsin, Bloomington, Illinois, Menomonie, Wisconsin and Denton, Texas. They divorced in 1968. Doris and the children returned to her roots in Minnesota moving from Denton to St. Peter in 1972. Doris took pride in her professional work as a nurse and concurrently raising her children to adulthood. She was an avid reader in her lifelong pursuit of knowledge, often a book in hand. Her nursing expertise always shone through her medical observations and advice. Doris married Francis Halverson on June 6, 1992 at Immanuel Lutheran Church in Clara City. They lived on a hobby farm in the Kerkhoven-Sunberg area. Francis died in 2020. Doris is survived by her children, Lawrence Jansen of Mankato, Loren (Laura) Jansen of St. Peter, Sharon (Travis) Smith of St. Peter, Dr. L. Dean (Carolyn) Jansen Warsaw, IN; numerous grandchildren, great grandchildren; sister, Arlene (Elmer) Hansen of Phoenix, AZ; brother, Lambert (Lois) Kleene of Willmar, step-daughters: JoAnn (Dan) Iverson, Bonnie (Matthew) Vrudny, and step-son: David (Ra Vy) Halverson and many grandchildren and great grandchildren; as well as other relatives and friends. She is preceded in death by her parents and husband, Francis. In lieu of flowers, the family respectfully requests memorials be directed to the PLN Foundation (a genetic disorder causing heart disease) PO Box 661, Winona Lake, IN 46590.

Memorials may be directed to the PLN FOUNDATION (A GENETIC DISORDER CAUSING HEART DISEASE) AT PO BOX 661 WINONA LAKE, IN 46590-0661

Send flowers to the Halverson family.