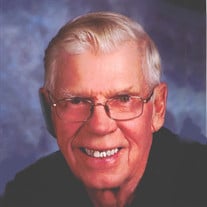 Donald Joseph Ruether, age 85, passed away peacefully at his home in Montevideo, Minnesota on May 14th, 2018 with his wife and children by his side. Don was born on June 26, 1932, to Joseph and Josephine Ruether of Madison, Minnesota. He was baptized and confirmed at St. Michael Church in Madison. Growing up on the farm without electricity or running water instilled a work ethic that stuck with Don throughout his life. Following his high school graduation, he proudly served his country in the US Army during the Korean War and was stationed in Germany. After his honorable discharge in 1954, he had a long career as a heavy equipment operator and mechanic for Duininck Brothers. In 1973, he co-founded Ruether Brothers Garage with his brother John and continued to build a successful business until his departure in 1990. After another 8 years in the road construction industry with Bituminous Paving, he started his dream job of managing the Montevideo Airport and remained there until his retirement in 2010. Don was a member of the VFW Post #380 and also the Montevideo American Legion Post #59. He valued time spent with his family and loved bantering back and forth. Don enjoyed his time flying as a private pilot and Sunday cruises after church with his children. In his retirement years, he loved tinkering in his shop and proved to be an exceptional artisan by crafting beautiful crucifixes and Christmas ornaments from battery cables. Don was a devoted husband, father, grandfather, great grandfather and servant of God. Don is survived by his loving wife of nearly 58 years, Diane; Daughter, Lori Ward (Rick); Sons, Brad and Brian (Patty); 8 grandchildren - Melissa, Brandon, Ryan, Reid, Cody, Andrea, Rachel, Peter; 5 great grandchildren - Camden, Maci, Cayson, Jaxton, Maxwell; 4 brothers – John (Janet), Wayne (Carol), Greg, Larry; 4 sisters - Jeanette Sachs, Gail Baldwin, Carolyn Meyer (Leonard), Mary Kelly (Chuck) and many nieces and nephews. He is preceded in death by his parents and his sister, Arlene (Jerry) Albrecht and other relatives and friends. Memorials may be made in Don’s name to Rice Hospice, online or 301 Becker Ave SW, Willmar, MN 56201.

Donald Joseph Ruether, age 85, passed away peacefully at his home in Montevideo, Minnesota on May 14th, 2018 with his wife and children by his side. Don was born on June 26, 1932, to Joseph and Josephine Ruether of Madison, Minnesota. He... View Obituary & Service Information

The family of Donald Ruether created this Life Tributes page to make it easy to share your memories.

Donald Joseph Ruether, age 85, passed away peacefully at his...

Send flowers to the Ruether family.