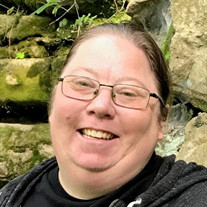 Diane Brandt, age 39, of Sioux Falls, South Dakota, formally of Granite Falls, passed way Friday, November 27, 2020 at her home. Funeral Services will be held on Monday, December 14, 2020 at 1:00 PM at Wing-Bain Funeral Home in Granite Falls. Visitation will be held Monday from 12:00 - 1:00 PM, one hour prior to the service. Diane was born in Granite Falls, MN to her parents, Bill and Wanda Brandt. She grew up in Granite Falls and attended school, graduating from Yellow Medicine East in 1999. Shortly after graduating, Diane lived in Willmar where she attended Ridgewater College and worked. Diane lived in Sioux Falls, SD for the last nearly 15 years where she worked as a pharmacy technician and, most recently, a childcare teacher. She liked to say she was a Minnesota girl in a South Dakota world. In all aspects of her life, there is no doubt that Diane gave with her full heart. Through her actions, she demonstrated to others what it means to be a positive impact on this world and those that live in it. Simply said, she believed in kindness, compassion and love. She had the courage it took to show kindness in a world where that's sometimes not the easiest thing to do. She did the right thing, not the easy thing. She led by example through her positive actions, both written and spoken words and always the warmest smile for anyone. The connections Diane had as a sister, daughter, granddaughter, aunt, niece and friend were cherished by her and she strengthened these relationships with frequent phone calls, emails, texts and greeting cards. Diane was well known for her love of family and music. Often, these went hand in hand. Diane often noted that part of her love of music was because of those she shared it with. Diane became a fan of many music groups and artists but to her, it was more than simply the music that drew her. The groups she connected with most shared her compassion for positivity and kindness and they expressed these values through the music she loved so much. Anyone who knew Diane knew that perhaps her strongest music connection was to a local band, Kory and the Fireflies. Any conversation about Diane wouldn't be complete without mentioning her admiration for the group. Her love of Kory and the Fireflies seemed instantaneous but that love grew and evolved into lasting relationships with the individual members and their families. It was a relationship based on what was important to Diane - family, music, kindness, generosity, peace and respect. Diane is survived by her parents, Bill and Wanda Brandt; her brothers Jason and James; her sisters Penny and Randi; her grandma Barbara Johnson; her niece Shakayla; her nephew Tayden; her aunts and uncle; and extended family and friends. Diane was preceded in death by her grandparents Darrel and Mabel Brandt, her grandpa Goodwin Johnson and a special aunt, Christine.

The family of Diane Brandt created this Life Tributes page to make it easy to share your memories.

Send flowers to the Brandt family.